The Amiga is a line of computers originally produced by Commodore Business Machines and marketed as a 16-bit replacement to the Commodore 64.

The first Amiga computer was released in 1985 in the form of the Amiga 1000, however it is the lower cost Amiga 500 from 1987 which is generally credited for reviving Commodore's fortunes with the brand as a gaming machine. The Amiga had sold 4.85 million units sold worldwide by 1993, including 3.8 million units in Europe (of which 1.5 million were sold in the United Kingdom).[1] 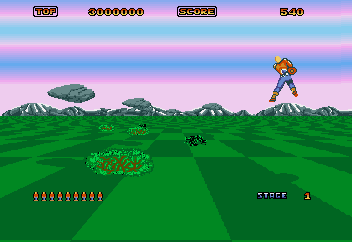 For many years, Space Harrier on the Amiga was the most accurate Western home port of the game available, even if the levels were originally split between two releases.

Like all home computers prior the rise of IBM PC compatibles running Windows 95 (and excluding the Sega-designed SC-3000), Sega did not bring any of its games to the Amiga directly, instead licensing out arcade properties to the likes of Activision (Mediagenic) and U.S. Gold, which would in turn sub-license development work to smaller studios. As the Amiga spent a good portion of its life being the most capable 16-bit home computer available to consumers in North America and Europe, it was natural that Sega games would appear on the platform.

Until the release of the Sega Mega Drive, the Amiga was often the best place for Americans and Europeans to go for the most accurate ports of 16-bit Sega arcade games (Japan having the X68000 and FM Towns as options), although a lack of close co-operation with Sega meant that all home computer conversions of this era took liberties with the source material. From a technical perspective, the Amiga 500 is a step above its closest rival, the Atari ST 520, and would not be truly challenged by the IBM PC until the early 1990s.

Most Amiga games were distributed on double density 3½-inch floppy disks, although the low storage capacity of this medium (usually 880kB when formatted) means games are often spread across multiple disks, with the user required to switch between them at certain points in the game.

While Commodore sold the Amiga in numerous territories, it was predominantly Europe that accepted it as a form of low-cost gaming, and so the majority of Sega titles for the Amiga were only sold in this region. Mindscape distributed a handful in the United States, but their success is hard to quantify due to the way the Amiga (and home computers as a whole) were marketed.

A side effect of competing against the Atari ST was that when faced with multiple platforms to cater for, game developers often did not fully utilise the Amiga hardware. It was common to see games written with the ST in mind, before quickly being ported to the Amiga with only minor improvements (if indeed any improvements were made at all). Part of the reason for this was that the Atari ST was able to undercut the Amiga's price at launch with a more focused marketing campaign - the ST became more common throughout much of Europe and so writing games for the system was initially a more profitable venture.

While perhaps not as versatile as an IBM PC, all Amigas are upgradable. As games were generally created for the mass market, most were typically designed to run on the most popular mass market Amiga machine - the Amiga 500, however the Amiga version of Power Drift for example can tap into the faster Motorola 68020 processor (a standard feature of the Amiga 2500) should one exist.