The Amstrad CPC is a range of 8-bit home microcomputers produced by Amstrad, starting in 1984.

The Amstrad CPC arrived comparatively late to the 8-bit home computer market, however at launch it represented value for money and was built to a high standard; designed to be simple to use and more than adequate as a business machine and a means to play video games. Amstrad's decision to bundle a monitor with the system as well as a built-in cassette drive are examples of this thinking, not to mention its wide array of initial software and "real" keyboard.

Amstrad's reputation in the electronics industry also allowed for more capital investment and a greater reach across Europe, ensuring a larger market than many of the CPC's less successful rivals. While never a market leader, the Amstrad CPC built up a healthy consumer base for much of the 1980s, leaving production in 1992 with an estimated 3 million units sold in total[1]. 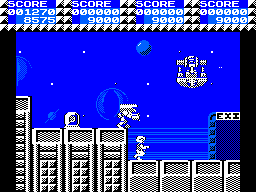 While the CPC was a capable machine, many of its games were quick ZX Spectrum ports, like Quartet.

Like all home computers prior the rise of IBM PC compatibles running Windows 95 (and excluding the Sega-designed SC-3000), Sega did not bring any of its games to the Amstrad CPC directly, instead licensing out arcade properties to the likes of Activision (Mediagenic) and U.S. Gold, which would in turn sub-license development work to smaller studios. While initially not as well supported as its rivals, strong sales across Europe meant the CPC received the lion's share of Sega home computer conversions between 1986 and 1992.

While a small handful of Amstrad CPC models exist, the majority of games (and all Sega-related ones) were designed to function on the original Amstrad CPC 464 model (which as the name suggests has 64kB of RAM). While Amstrad would go on to produce the (backwards compatible) CPC 6128 (with 128kB of RAM) and the enhanced "plus" range, no Sega games took advantage of the improved hardware, and indeed no other model matched the 464's success in the market.

While the Amstrad CPC shares several components with its rivals (most notably the Zilog Z80 processor shared with the ZX Spectrum and the General Instruments AY-3-8912 sound chip seen in several computers at the time), it is graphically more capable than the Spectrum and better suited to some tasks than the Commodore 64. There are three "official" display modes on a CPC; 160x200 with sixteen on-screen colours (mode 0), 320×200 with four colours (mode 1), or 640×200 with two colours (mode 2), out of a palette of 27, with games developers generally opting for either mode 0 or 1.

However, with development teams faced with supporting a wide variety of machines from old 48k Spectrums to high-end Amiga platforms, relatively few multi-platform games took full advantage of the CPC's unique hardware, and in the worst cases, simply ran Spectrum code through graphics mode 1. While the CPC does not suffer from the "colour clash" seen in the Spectrum (or MSX), its design meant that the CPU was clocked slightly lower than the Spectrum, which if not addressed could lead to performance issues.

Like its 8-bit rivals in Europe, most Amstrad CPC software was distributed on compact cassette, though following the May 1985 launch of the (unsuccessful) CPC 664, Amstrad began incorporating 3-inch floppy disk drives into units as a replacement for the cassette deck (external drives being an option for all models). This means, much like the Commodore 64, later games were often simultaneously released on cassette and disk, with the latter usually commanding a higher price tag.