The Atari ST is a line of computers produced by Atari Corporation from 1985 to 1993. It is a successor to the Atari 8-bit line. 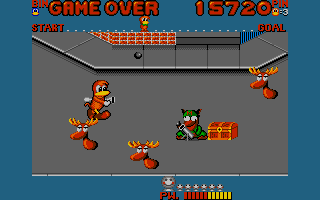 Dynamite Dux on the Atari ST is identical to the Amiga version, aside from the reduced resolution and simpler sound.

Like all home computers prior the rise of IBM PC compatibles running Windows 95 (and excluding the Sega-designed SC-3000), Sega did not bring any of its games to the Atari ST directly, instead licensing out arcade properties to the likes of Activision (Mediagenic) and U.S. Gold, which would in turn sub-license development work to smaller studios. Alongside its main competitor, the Amiga, the Atari ST was a market leader of 16-bit computers across Europe in the late 1980s, so was the recepient of many video games.

While initially met with scepticism from the computing industry, the Atari 520ST built up a loyal fanbase from its launch in 1985, particularly in Europe where an estimated 75% of Atari's computers were sold. While not as technically advanced as the Amiga, the ST could deliever competent 16-bit applications for less, and had a two year head start in the gaming market before the 1987 release of the Amiga 500.

The base Atari 520ST model is technically inferior to the mass-market Amiga 500 machine that it usually fought against in the marketplace. While Atari continuously improved the hardware (the STE series being the first key upgrade), few games made use of the extended features due to a desire to support as many Atari ST machines as possible. However, much like the relationship between the ZX Spectrum and Amstrad CPC at the time, development costs were often minimised by targeting the Atari ST and then porting content to the Amiga with minor (and sometimes no) changes.

Under these circumstances, if the developer was unwilling or unable to optimise the game for Amiga hardware, both 16-bit versions would be virtually identical. In a worst-case scenario, the game may even perform worse on the Amiga, as the Motorola 68000 processor in the Atari is clocked higher.

Most Atari ST games were distributed on 3½-inch floppy disks, however initial models of the computer could only read single-sided disks with 360kB of storage when formatted. Later drives upped this to double-density 720kB variants, however the low storage capacities of these mediums meant that games are often spread across multiple disks, with the user required to switch between them at certain points in the game. "Disk swapping" was more common on the ST, as all Amigas could read up to 880kB formatted disks as standard.

While Atari sold the ST in numerous territories, it was predominantly Europe that accepted it as a form of low-cost gaming, and so the majority of Sega titles for the Atari ST were only sold in this region. Mindscape distributed a handful in the United States, but their success is hard to quantify as by this point, the IBM PC was becoming the accepted standard.