While the Mega Drive is indeed capable of faster processing performance than the SNES, particularly due to the Mega Drive's Yamaha YM7101 VDP graphics processor having a faster DMA controller along with higher memory bandwidth (see Sega Mega Drive/Hardware comparison for a technical comparison with the SNES), the term "blast processing" itself was vague and unclear, due to a lack of technical explanation from Sega. The term is thus open to interpretation, and has been interpreted in different ways, as a reference to either the Mega Drive's faster performance, its higher CPU clock rate, its DMA controller, a specific DMA color technique (which is apparently what inspired the term), or just a meaningless marketing gimmick (as claimed by Nintendo). In more recent years, the term "blast processing" is occasionally used as a reference to the fast blitting capabilities of its DMA unit (see Sega Mega Drive/Technical specifications for details).

As it transpires, "blast processing" was originally a reference to a graphical technique mentioned by Marty Franz, taking advantage of a hardware feature in the Yamaha YM7101 VDP graphics processor's DMA unit. On a Mega Drive, it is possible to change the colour palette during the H-blank interval by "DMA-ing" (a.k.a. "blasting") information into CRAM (Color RAM). However, doing so has the (usually) unwanted side effect of creating CRAM dots - rogue pixels which would corrupt the image if the trick was used too often.

It would not be until many years later when a perfectly synced blast processing technique would be achieved,[4] but at the expense of fully utilising the Mega Drive's 68000 processor in order to display an image. The process also produces "chunky" pixels, meaning that while 512 colour images are technically possible, they do not make use of the full 320x224 screen resolution.

The DMA unit's ability to change the CRAM palette (as well as the VRAM and scrolling) during active display is also mentioned in Sega's technical manual.[6]

The technique of drawing an image through using DMA (direct memory access) was not understood by Sega of America's marketing department (or indeed by many developers, as again, it was never seen in commercial games). Nor did it seem like they understood what DMA was. Instead, the words "blast" and "processing" were picked up and ran with, and the media and general public was tasked with filling in the blanks.

For many years, it was assumed that the term was referring to the Mega Drive's CPU, the 68000, having a higher clock rate than the Ricoh 5A22 S-CPU found in the Super NES. At a time when technical details were hard to come by, it was widely assumed that bigger numbers were better, without taking into account what the two integrated circuits were actually doing with each clock cycle. Sega of America's marketing department may have also interpreted "blast processing" as simply a higher CPU clock rate.

Blast processing was also used in conjunction with Sonic the Hedgehog 2 advertising, to suggest that it made Sonic "faster than ever". One trick used was to have the ground speed cap removed, leading to a situation in Chemical Plant Zone where Sonic appears to out-run the camera. This was entirely the decision of the programming team behind the game, rather than a hardware trick.

Separately, Sega stated that blast processing was "the total power dedication of the Genesis system to giving a character on screen a very quick blast of speed", a cited example being the spin dash manoeuvre in the game.[7]

A more likely reason why Sonic 2 was chosen to demonstrate "blast processing" was its high-speed parallax scrolling, which was noticeably faster than what was seen in SNES games. While it is technically possible to match its scrolling speed on the SNES, it would require either significantly reducing the amount of graphics data on screen, or using enhancement chips. The Mega Drive's faster graphics DMA unit allows it to perform high-speed parallax scrolling with more graphics data on screen, which Sonic 2 was able to demonstrate to great success. It even maintained its speed at a higher 320x448 resolution in 2-player mode (compared to its standard 320x224 resolution), whereas the SNES wouldn't be able to reach such a speed at resolutions above 256x224.

In more recent years, the term "blast processing" is occasionally used as a reference to the Yamaha YM7101 VDP graphics processor's DMA unit, due to its fast data blitting capabilities (see Legacy section below).

The Nintendo-backed Nintendo Power magazine challenged Sega's customer service and PR firm about blast processing in the summer of 1993, claiming that in their view, it was marketing speak for the programmers "know[ing] what they're doing"[8]. They would also commission evaulation company Booz-Allen & Hamilton to compare the Mega Drive and Super NES, predictably claiming that the SNES offered better equipment for building "faster, more complex games"[9]. 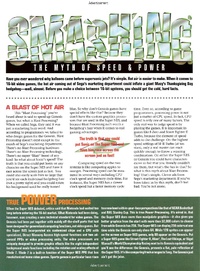 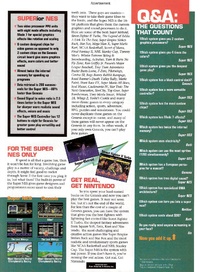 However, it was not until the middle of 1994 where Nintendo became more vocal about the subject. Most notably, they published an advertisement entitled "SMASHING The Myth About Speed and Power" in popular US video game magazines such as Electronic Gaming Monthly, GamePro and Game Players which aimed to counter Sega's narrative.[10]

"Blast processing" was a term used only for a few years by Sega in one region of the world, North America. While a vague term not understood by most consumers (or even many developers), it achieved Sega's goal of generating recognition for their video game console in North America, while simultaneously causing people to challenge the credentials of its rival, the Super NES. "Blast processing" has since become synonymous with the Mega Drive console. In the years after the system was discontinued (and indeed when Sega left the video game console market entirely), "blast processing" has made its name in popular culture, appearing in Sega-related merchandise and even some video games (such as Sonic Mania).

Homebrew programmers in recent years have utilized the fast blitting capabilities of the DMA unit to demonstrate various technical feats on stock Mega Drive hardware (without add-ons or enhancement chips), such as Star Fox demos showcasing 3D polygon graphics[12][13] (also in commercial games such as Star Cruiser, Hard Drivin' and Race Drivin'), Mode 7 style scaling and rotation (such as the Sonic Team Racing demo),[14] an accurate port of Wolfenstein 3D with full ray casting (also in commercial games such as Duke Nukem 3D), software mixing allowing audio playback of multiple high-quality PCM sample channels (such as the Sonic: Next Level demo),[15] and FMV playback[16] (also in commercial games such as Sonic 3D Blast). The Mega Drive's DMA unit is thus sometimes viewed as a "blast processor".