GG Aleste II (ＧＧアレスタII), released as Power Strike II in Europe, is a shoot-'em-up for the Sega Game Gear in Compile's Aleste series and the sequel to GG Aleste.

Earth is protected by a set of armored defensive satellites. An unknown object has attached itself to the largest of these satellites, named Algo and similar in size to the Moon, and taken control of it. Pilot Alice Waizen, cousin of Ellinor Waizen, is testing the prototype GG Aleste Model II "Lance Bird" ship when she is alerted to this threat and flies off to stop it.

The game is a vertically scrolling shooter. The player controls Alice piloting the Lance Bird, which is moved in any direction with the D-pad. The Lance Bird has a standard weapon that is fired with

to attack everything on screen. Additional G Strikes can be acquired by collecting a certain number of Power Chips.

The Lance Bird has a Round Field Generator that shields it from one hit. It is activated by collecting enough Power Chips. The Lance Bird is destroyed if it takes damage from an enemy without the Round Field Generator active, costing the player a life. The ship respawns after a moment, and the player's weapons are downgraded a level after losing a life. The game ends if the player runs out of lives, but the player has unlimited continues. The player gains extra lives at certain point thresholds.

There are four selectable difficulty levels.

The special weapon is chosen at the beginning of the game and can be changed by collecting item pick-ups.

The Lance Bird is temporarily invincible after collecting an item.

Bonus areas are played after Rounds 2 and 5. They are played from a first-person, 3D perspective. Enemies fly toward the player. Holding

while moving the targeting reticle over enemies highlights them, and releasing

fires at the highlighted targets. Each bonus stage has 20 enemies, and the player is given bonus points at the end of the stage for the amount of enemies successfully hit. 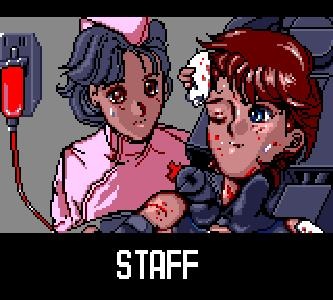