Sega of America, Inc. is the American branch of video game developer Sega.

Sega has technically had a presence in the United States ever since its 1946 inception as an American entity, but it was it’s later Japanese incarnation Sega Enterprises, Ltd. that would grow to see actual success. Acquired by Gulf+Western in 1969, the purchase allowed the company to expand into the American market in 1974 with the establishment of Sega Enterprises, Inc. in Los Angeles, California. Initially importing Japanese games while producing games of their own (and even a consumer television), this American branch also traded under the name “Sega of America” for the next decade.

Eager to expand Sega’s newfound presence in the United States, the company acquired American arcade developer Gremlin Industries to become Gremlin/Sega, and with the increased production capability was able to steadily establish itself in the arcades of the early 1980s. It also began to develop arcade ports for the fledgling home market, with games being released on the Atari VCS, home computers, and other platforms. Renaming itself Sega Electronics in 1982, the division continued to produce games up until its assets were purchased by arcade manufacturer Bally Midway the next year.

Later seeking to rejoin the American market, Sega Enterprises, Ltd. would established two new American subsidiaries: Sega Enterprises, Inc.[5] on March 21, 1985 to again distribute its arcade games in the West, and Sega of America, Inc. on March 10, 1986[6][2] to assist with consumer products like the upcoming Sega Master System. The two subsidiaries co-existed for several years and both had San Francisco Bay Area offices closely nearby another.

Tonka and the Master System

In late 1987 Sega of America partnered with Tonka to market and distribute their recently-launched (and poor selling) Sega Master System. Tonka’s knowledge of the American toy market was seen as highly valuable, and the joint venture exceeded expectations in turning around ailing Master System sales. While Sega of America choose not to continue this partnership, the experience it gained in the home console market would prove indespensable.

At this time, the American branch served mainly as a channel for bringing games to the West, and as a result Sega’s first home console saw little third-party support. Although sporting a library of quality Sega-produced titles, the console was unable to effectively establish itself in a market dominated by the wildly-popular Nintendo Entertainment System. Nearing the launch of what was now Sega of Japan’s upcoming 16-bit machine, American executives identified what they believed to be holding the company back, and what changes would be necessary, for eventually taking on Nintendo’s monopoly of the home market. Above all however, it was felt that the American market needed games tailored for American tastes; a philosophy would be at the heart of much of Sega of America’s methodology. Instead of waiting for the production of Japanese software, only to have to further localize them, Sega of America could establish in-house game development and produce software domestically. 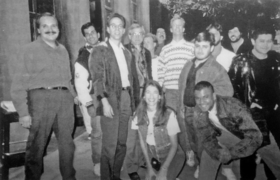 Sega's Product Development Team ensured the launch of the Genesis would be strong enough to challenge Nintendo's monopoly.

While the company prepared for the release of the Sega Genesis, newly-hired Director of Product Development Ken Balthaser realized many of these domestic productions would not be ready by the system’s launch. It was decided that Sega of America would contract third-party developers in the United States and Europe to ensure the Genesis launched with games tailored to American tastes. Externally-developed games would be supervised by a Sega of America producer who would coordinate between the two companies, with games often being conceptualized and seen to completion by the same producer.

A strong showing of quality sports games was also deemed as crucial to breaking through to the Western market, and together with the upcoming machine being leagues above what the Nintendo Entertainment System could currently provide, Sega of America was finally ready to introduce North America to the next generation. And it needed to show consumers that a geared-up competitor had finally arrived; one that could dethrone Nintendo.

The 1989 launch of the North American Sega Genesis was overwhelmingly successful. While supported by a quality game library of foreign and domestic games (some featuring something novel - celebrity endorsements), the Genesis most strongly banked on its clever marketing to demonstrate the machine’s superiority over the existing Nintendo Entertainment System. Most notable was the 1990 ad campaign Genesis Does. Created by advertising agency Bozell, it was an instant hit with both Sega executives and the American public. With a tagline of “Genesis Does What Nintendon’t”, the campaign produced a stunning commercial featuring numerous celebrities, shots of colorful games, and a catchy accompanying song featuring the line “You can’t do this on Nintendo.” Many began to see Sega as not just the first real competitor to Nintendo, but as the next step entirely.

Suddenly, Sega of America had created a corporate image for themselves, but one framed by Nintendo: Sega was the cool, cutting-edge company that makes games for cool older American kids, and Nintendo was the safe, slow rival. With the arrival of Sonic the Hedgehog, the continued success of the Sega Genesis against the Nintendo juggernaut was all but assured, and while this corporate image would grow less appealing as more forced attitude was used, it showed that Sega was willing to focus everything in its power to show it was the true “anti-Nintendo.”

Sega of America would later establish the Videogame Rating Council rating system for its games in the summer of 1993. Created in response to Mortal Kombat’s Sega Genesis release to further differentiate mature themes in its games, the system would directly influence the design of the industry-wide Entertainment Software Rating Board created the following year.

The Sega Super 32X was originally designed as a standalone console to replace the Sega Mega Drive. In Japan, that platform was not as popular as had been hoped, and a more-modern but still backward-compatible system seemed more feasible. In the United States however, the Sega Genesis had a significant market share and was already installed in millions of American homes. Sega of America reasoned that to ask those consumers to replace their systems entirely was unfeasible, and the end result of these discussions was the Sega Super 32X’s redesign as a peripherial for existing Sega Mega Drive hardware.

Struggles selling the Sega Saturn in North America led to a scaling back of internal production and consolidation of many of Sega of America’s development teams.

End of an Era

Beginning in 2005, Sega of America underwent a string of wide restructurings. Sister company Sega Enterprises, Inc. merged with the company on April 1, 2008[5]. The resulting company retained the name Sega of America.

After a 2015 evaluation of the company’s future, it saw further downsizing, and relocated from its San Francisco, California office to one in Irvine, California. Now sharing offices with the Sega-owned Atlus USA, both companies are primarily focused on localization and licensing.

An additional office dedicated to handling the Sonic the Hedgehog franchise exists in Burbank, California. The office, and its team, go by the title Sonic Studio.