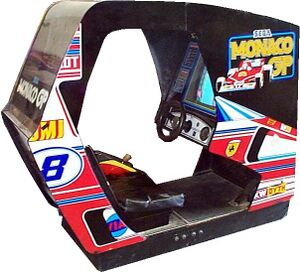 Monaco GP, released in 1979, was one of Sega's most popular games from the era.

The era of pre-System 1 arcade systems, lasting from 1973 to 1984, was one of the most diverse in Sega's history. The use of several different architectures contributed to a wide array of games, from vector-based titles like Eliminator and Star Trek to VIC Dual games such as Deep Scan and Head On and laserdisc titles like World GP and Astron Belt. Key to Sega's success in North America at this time was their relation with Gremlin Industries; many of Sega's titles from 1977 to 1981 were either published by, or co-produced with, the coin-op start-up. Additionally, Sega collaborated with industry powerhouses like Bally Midway and VIC Tokai to establish their security in North America during the video game crash of 1983. With most of the games produced during this time falling under the "Golden Age of Arcade Games," several titles from Sega, such as Zaxxon, Turbo, and Pengo, are considered arcade classics to this day.

This category has the following 10 subcategories, out of 10 total.