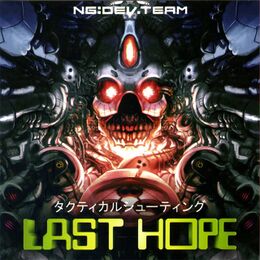 2007's Last Hope was marketed as being "the last Dreamcast game"... before others were announced.

The Sega Dreamcast has been pronounced "dead" several times. Console production was officially discontinued in 2001, and game releases in North America and Europe ground to a halt in 2002. Japan held out much longer with official releases continuing for some time, slowing to a trickle in 2005 and finally ceasing with Milestone's Karous in 2007.

But support for the console has never faded away completely thanks to independent developers and publishers. To this day there are Dreamcast games in development, meaning its lifespan has technically surpassed the Sony PlayStation 2 - the console that is said to have caused Sega to pull out of the manufacturing business.

Independent games for the Dreamcast can exist as most Dreamcast models are able to boot compact discs using the Mil-CD format. Official games used GD-ROMs, a proprietary optical disc format which allows for more storage space than a typical CD-ROM (and is more secure), but as a Dreamcast can run CD-Rs without the need for extra modifications (unlike consoles both before and after), it is a popular platform for homebrew and independent development.

The first widely accepted independent Dreamcast games are those in the bleemcast! series. Newer games are typically region-free, and are usually sold via online stores such as Play Asia. As the games are not usually backed by Sega, packaging and box designs are largely inconsistent, with newer games often being packaged in DVD boxes (following the example set by Karous) as a result.

This category contains only the following page.