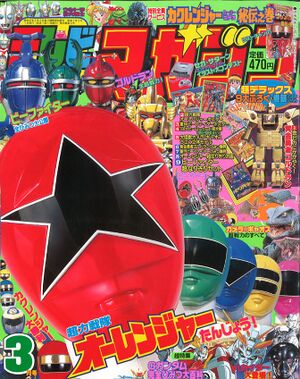 The game's producer Noriyoshi Oba would contact "Mr. Sahara (佐原氏)" from the Editorial Department of Japan's TV Magazine (テレビマガジン)[3][4], and the contest was first advertised on the front of the February 1995 (cover dated March 1995/1995.03) issue as "セガ・サターンクロックワークナイトイラスト大コンテスト" and simply "クロックワークナイトイラスト大コンテスト" on the Contents Page.

The prizes that were on offer were as follows:

The contest would ended on 1995.03.05, and the winners of the Contest were later announced in the 1995.05 issue of TV Magazine. The presumed winners of the contest had their names and illustrations shown during the credits of the NTSC-J version of the game, along with a few others who didn't win. Said illustrations can be seen here.

The contest itself, "Mr. Sahara" and TV Magazine are mentioned by Noriyoshi Oba in the "README.DOC" file found on the Disc for the Japanese version of the game, which is discussed below. TV Magazine was also thanked as "テレビマガジン編集部のみなさん (TV Magazine Editorial Staff)" in the Japanese Version credits under the "Special Thanks" section.