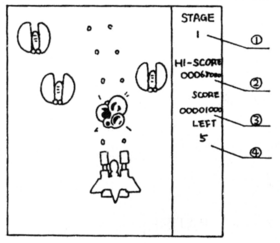 The manual's explanation of Divine Sealing's HUD, hand-drawn by the game's developers.

Falchion: Protagonist and pilot of the spacecraft Divine.

fires the player spacecraft's weapon, and

is used to advance cutscenes.

Every 10,000 points upgrades the player's weapon and awards an extra life.