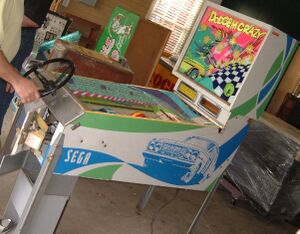 Dodgem Crazy is a 1970 electro-mechanical car game by Sega. Reminiscent of the Burnout series of video games, the objective is to roll over the game's car by ramming it with the one the player controls, thus scoring a "hit" (seven hits maximum). This is accomplished in a set time (timer clock located in score glass). As the player presses the accelerator pedal with his foot, the two cars can ram. The player's car has a solenoid-driven bumper to give the game's car a hard hit. If the game's car flips over, an internal switch inside the car closes and registers a "hit" on the score glass. The cars seem like they move because they are ridding on a large moving conveyor belt. The game car moves closer to the player's car when the cable attaching to the game's car gets more slack (as the player accelerates). Also the game can control left and right movement of its car (as can the player control their car via the steering wheel). The cabinet has a cracker chute in the back board which acts as a speaker outlet for the 8-track tape player.

The cabinet is the same as the 1970 Sega Stunt Car.