It is not entirely certain where the phrase originates from, nor is there an exact definition of what "full motion video games" should refer to, however it is typically used to describe certain video games of the late 1980s and early-to-mid 1990s, which are centered around the concept of being able to decode and stream digital video in real time (as well as providing a gameplay experience).

The first game to use full motion video was Nintendo's 1974 arcade light gun shooter Wild Gunman, which used video projection from 16 mm film to display live-action cowboy opponents on a projection screen.[1][2] Another early arcade game to use full motion video was The Driver, an action-racing game released by Kasco (Kansai Seiki Seisakusho Co.) in the 1970s that also used 16 mm film. It required the player to match their steering wheel, gas pedal and brakes with the movements shown on screen, presenting dangerous situations much like those seen in the laserdisc video games that appeared the following decade.[3][4]

The first FMV video game was Sega's laserdisc game Astron Belt, which ran on the Sega Laserdisc hardware, revealed in 1982 and released in 1983. It was followed by the laserdisc game Dragon's Lair later in 1983. Laserdisc games were usually either shooter games with full-motion video backdrops like Astron Belt, or interactive movies like Dragon's Lair. Data East's 1983 game Bega's Battle introduced the use of brief full-motion video cutscenes to develop a story between the game's shooting stages.[5] Other laserdisc arcade games included Space Ace, Taito's Ninja Hayate and Time Gal, and Data East's Road Blaster.

Full Motion Video became common within video games in the early 1990s. While a previous generation had enjoyed experiments on LaserDisc-based arcade systems, the hardware was deemed far too expensive to produce for home video game consumers at the time. Furthremore, the LaserDisc format ended in tragedy and failed to win over the hearts and minds of VHS owners. 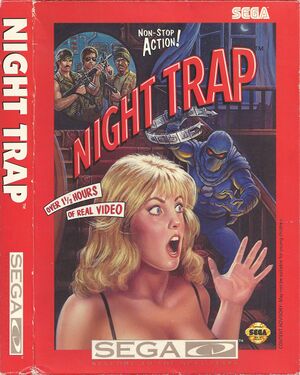 For a while, the idea was popular, particularly with North American consumers. Entire systems were built or conceptualised to handle FMV games and to many it was seen as "the future". The general public had different ideas however, and though the likes of Night Trap had initially proved popular (if not just for the controversy that surrounded it), most FMV games failed to capture its success. Unlike a game built with traditional methods, a pre-rendered video cannot be changed in real-time, and thus it is very difficult for the player to manipulate their surroundings in any way.

Relationship with the Sega Mega-CD

The Mega-CD in fact struggles with the concept of full motion video, and compares unfavorably to many of its rivals - the TurboGrafx-CD, Atari Jaguar CD, Neo Geo CD, Philips CD-i, FM Towns Marty, Panasonic 3DO and Amiga CD32. This is because the Mega-CD suffers from the same restrictions as the Sega Mega Drive in terms of on-screen colours - only 64 colours can be outputted on screen at once, which often leads to grainy, low quality video in which detail is lost. The Sega 32X add-on can increase the colour count significantly, but this required extra investment - typically more than any of the consoles mentioned.

Relationship with the Sega Saturn

FMV games are far rarer on the Saturn, but the superior hardware means that the games perform better than on the Mega-CD. This generation of consoles spurred the industry to move away from FMV games and into polygon-based 3D visuals.