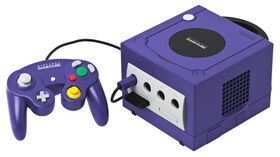 The Nintendo GameCube (Japanese: ゲームキューブ; Romaji: Gemu Kyubu) is a video game console by Nintendo belonging to the 128-bit era; the same generation as the Sega Dreamcast, Sony PlayStation 2, and Microsoft Xbox.

The Nintendo GameCube (originally code-named "Dolphin" during development) was released on September 14, 2001 in Japan; November 18, 2001 in North America; and Spring 2002 across Europe. The Nintendo GameCube, or GCN, was widely anticipated by many who were shocked by Nintendo's decision to design the Nintendo 64 as a cartridge-based system. Physically shaped similar to a geometric cube, the Nintendo GameCube uses a unique storage medium, a proprietary format based on Matsushita's optical-disc technology; the discs are approximately three inches in diameter (considerably smaller than a standard CD or DVD), and the discs have a capacity of approximately 1.5 gigabytes. The outside casing of the Nintendo GameCube is most often Indigo, but the system is also available in other colors, such as Platinum (a silvery color) and Jet (a very dark gray color or black). In Japan, the system is also available in Spice (an orange color) or in limited edition colors like Crystal White (for Final Fantasy: Crystal Chronicles), Mint Green (for Tales of Symphonia), Copper (for Char Aznable from Gundam) and White with black pinstripes (for the Hanshin Tigers). The GameCube system used for testing software during development is a chocolate color.

* The Digital output was removed in a hardware revision in May 2004. Models without the port are DOL-101. More info from Nintendo.com

Sonic Games for the Gamecube

Sonic Cameos for the Gamecube