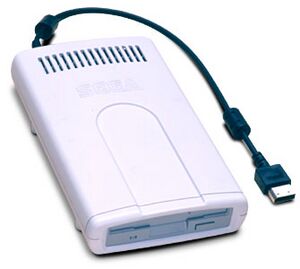 The Saturn Floppy Disk peripheral is an add-on to the Sega Saturn console released in Japan by Sega on July 27, 1996, for 9,800Y. The drive uses commercially-available 3.5-inch floppy disks (MF-2HD) for external storage from the console. It connects to the Saturn using the console's rear extension communication terminal. By using the included FDD software, users can copy data from the console's internal RAM. It can also be used by games or software to save to floppy disk directly. The floppy disk's set includes the floppy drive, AC adapter, FDD Operator CD-ROM and a floppy disk.

The floppy disk drive is a rare peripheral, and it's not even listed on the peripheral sheet that came with late Saturn consoles, though it was listed earlier. The Japanese version of Panzer Dragoon Saga supports it directly, as does Dezaemon 2's shooter construction kit. Although it might not have been on external peripheral lists, the floppy disk extension was in the dev kit info. In fact, anyone who used Sega's libraries (they're in the BIOS) to write savegames could have supported the floppy drive. They might have intentionally not done that, given that it would have been impossible to test without the drive, but the save libraries do support removable storage to some extent. (Internally, it supports selecting partitions, directories, etc.)