Studio Fazzy Co., Ltd. (株式会社スタジオファジー) was a Japanese unlicensed adult video game developer, notable for the relatively-high production values of their two known Sega Mega Drive titles, Divine Sealing and Dial Q o Mawase!, and for being one of few unlicensed developers to produce and release their games exclusively in Japan. 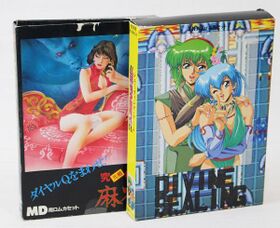 High production values resulted in their games being sold at a premium.

Studio Fazzy was one of among many unlicensed adult software developers established to cater to the home console market. However, unlike the majority of these companies (which were often based in Taiwan), Studio Fazzy was headquartered in Japan and staffed by Japanese developers, and most notably - its games were only released domestically. The company took notable strides to act as a legitimate business (even publishing its real address in its manuals[1]), and the production quality of their work generally far surpasses other unlicensed adult software companies.

Like most unlicensed adult games released in 1990s-era Japan, both the developer's releases came packaged in a cardboard box[2]; Studio Fazzy again dedicated a significant amount of consideration to the quality of their box artwork, featuring relatively well-drawn artwork and design for the unlicensed adult market. In the case of Divine Sealing, the game was sold as a premium item[3] and priced accordingly - available for the equivalent of about $85.[3]

Both Studio Fazzy's games feature the same cartridge design, appearing similar in shape to Sunsoft's rounded Mega Drive cartridges but with the lower section of each side removed. The extra clearance afforded by the cartridge's slimmer lower half is a purposeful design choice by the developer, and allows the company's games to be inserted into any Sega Mega Drive system, regardless of region or shell.