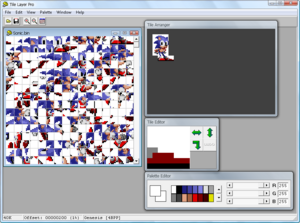 Tile Layer Pro, by SnowPro, is the Win32 version of the popular ROM hacking utility program Tile Layer. Despite the sound of its name, Tile Layer Pro is not a commercial piece of software, it is in fact freeware. The Pro suffix, so commonly used to indicate commercial versions (e.g. Realplayer Pro), in this case only signifies the Windows version of the program.

The main features of the program include:

Because SMD is an interleaved format, Genesis ROM files need to be converted to BIN files, but seeing as TLP doesn't recognize BIN as a file format, files must be opened using the "All Files..." command, then have their format to Genesis. A hack of TLP by PACHUKA circumvents this step.