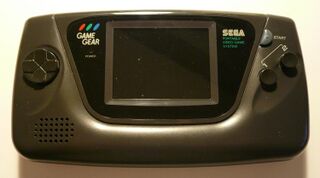 The Game Gear (ゲームギア) is a handheld video game console developed by Sega and released in late 1990 as a response to Nintendo's Game Boy handheld . It is a full colour console and was Sega's first attempt to compete in the handheld games market (the second being the Sega Nomad — a handheld Mega Drive). In South Korea it is known as the Handy Gam*Boy (핸디겜보이).