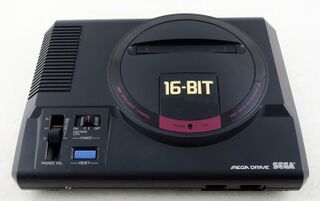 Codenamed the Sega Mark V during development[1] it is Sega's fifth video game console (following the SG-1000, SG-1000 II, Sega Mark III and Sega Master System) to be released, but only the second substantial hardware upgrade. The Mega Drive's selling point was its 16-bit main processor, with in adddition to superior graphics capabilities, allowed for a more advanced gaming experience previously limited to the arcades.

The Mega Drive is Sega's most successful video game console, with 40 million hardware units sold worldwide,[2] including more than 20 million in the United States, over 9 million in Western Europe, 3.58 million in Japan, and 3 million in Brazil.[3]. It has a software library consisting of more than one thousand games; more than previous generations of Sega hardware combined.

This category has the following 8 subcategories, out of 8 total.