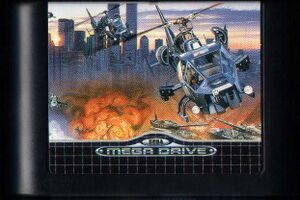 Super Thunder Blade was a launch title for the system and is a fairly common game.

As the Sega Mega Drive (Sega Genesis in North America) was Sega's most successful video game console, there were thousands of Mega Drive games released for the platform. In Japan, the console debuted in October 1988 with Space Harrier II and Super Thunder Blade as launch titles.

Many of Sega's early Mega Drive releases were aimed to steal as much market share from Nintendo as physically possible, with Sega porting many of its arcade hits such as Altered Beast, Golden Axe and Columns, as well as partnering with celebrities to produce Michael Jackson's Moonwalker, Pat Riley Basketball, Arnold Palmer Tournament Golf, James 'Buster' Douglas Knockout Boxing, Joe Montana Football, Tommy Lasorda Baseball and Mario Lemieux Hockey. Progress was still fairly slow until the release of Sonic the Hedgehog in 1991, prompting Nintendo to step up support for the Super NES. Sega would then focus its efforts on attempting to beat the SNES on all fronts, releasing unsuccessful Mega-CD and 32X add-ons with their own set of games, and attempt to beat games such as Donkey Kong Country and Star Fox with titles such as Vectorman and Virtua Racing respectively.

Mega Drive games are still being released to this day, albeit in small numbers. Many games are bundled with plug-in-and-play systems, or through compilation packs or downloads. There have been some special releases, such as 2006's Beggar Prince, which was distributed on a cartridge.

This category has the following 12 subcategories, out of 12 total.