Barney's Hide & Seek Game is a Sega Mega Drive educational children's game developed by Realtime Associates and published by Sega. Released in the United States in June 1993, it was later released in Brazil in June 1994. Based on the popular children's television franchise Barney, the game features extensive digitized voices recorded by Barney performer Bob West, and introduces children to concepts such as numbers, shapes, and basic problem solving.

Barney must locate both five children and five presents hiding throughout each of the four different levels to progress. Barney can walk, jump, and float with a balloon to reach new areas; he can also blow kisses by pressing any button, although this has no effect on gameplay. By locating all children and presents in all levels, a special ending is unlocked.

Barney does not have a health bar and cannot be harmed. In fact, the game emphasizes safety to such a degree, that if Barney should try to fall from a ledge, the player is presented with a lecture on ledge safety. Additionally, there is a self-play feature that will walk Barney to the end of the level should players put the controller down for an extended time.[1] 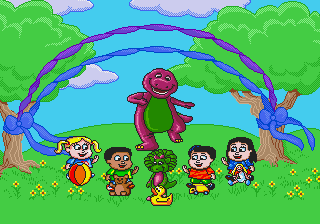