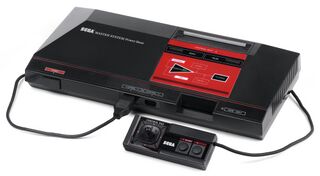 The Sega Master System (セガ・マスターシステム) or SMS, is a cartridge-based video game console manufactured by Sega. It is a rebranding of the Sega Mark III intended for western markets, which in turn was a successor to the SG-1000 and SG-1000 II. In South Korea the Master System was distributed by Samsung and known as the Gam*Boy (겜보이) and later Aladdin Boy (알라딘 보이). It was codenamed the Sega Mark IV during development.

The Sega Master System was the first of Sega's consoles to see widespread distribution outside of Japan, and went head-to-head with the Nintendo Entertainment System (the international version of the Famicom) across the world. Sega was unsuccessful at dethroning Nintendo in the key markets of Japan and North America. However, significant sales in Europe and South America saw the console match and outsell the NES in those regions respectively, and supported as late as the mid-1990s in Europe and through to the present day in Brazil, receiving a large library of software in those regions. It is Sega's second most successful video game console of all time, with an estimated 20 million units sold worldwide, largely in Brazil and Europe.[1]

The following 13 pages are in this category, out of 13 total.