Back to: Sega Master System. 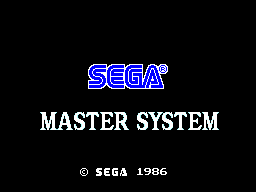 All variants of the Sega Master System come preinstalled with a boot ROM - an interface which appears when the console is given power. Almost all of Sega's hardware systems had some form of startup sequence that graphically told the end user that a game was loaded and ready to play. The original Japanese version of the Master System, the Sega Mark III, did not have a BIOS and instead would boot straight to the inserted game.

The first known BIOS released featured an animated blue SEGA logo, along with MASTER SYSTEM written underneath. This version of the BIOS was only used with the prototype Master System and is designated as "Prototype M404" among emulation communities[1]. (See here for video demonstration)

When the Master System was released in the fall of 1986, it introduced a different startup sequence from that used by the prototype. The animation sequence this time was the SEGA logo sliding from the left side in the center of the screen, followed by MASTER SYSTEM and its copyright information shown underneath. The trademark SEGA sound as later heard in many of the Sonic the Hedgehog games, is also played in the background using melodic system tones (See here). If no cartridge or card was inserted, the user would be presented with a screen that tells them how to start a game.

The Japanese release of the SMS BIOS offered graphical enhancements along with music from Space Harrier, which utilized both the YM2413 FM audio and standard PSG audio. (See here). 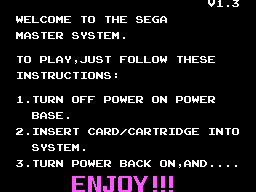 Screen shown when no cartridge is inserted in a v1.3 Master System.

What was unique about the Sega Master System at the time was that Sega had included built-in games that could be played without any cartridges or cards inserted. While original releases of the system did not have any retail games built-in, there was an extra hidden game that could played upon startup. By pressing

on Controller 1 on the instructions screen, the player could play the hidden Snail Maze game.

Sega would later package other games with the system built-in similar to the Snail Maze game, but was no longer hidden to the end user. Rather, the boot ROM would automatically boot into the built-in game after displaying the Sega startup sequence. Depending on the console build and BIOS included with the system, players could choose to play either Hang-On / Safari Hunt, Hang-On, Missile Defense 3-D, Alex Kidd in Miracle World, and Sonic the Hedgehog.