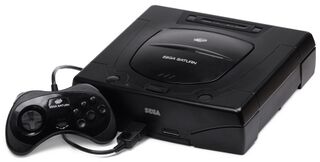 The Sega Saturn (セガサターン), is a video game console manufactured by Sega and was the successor to the Sega Mega Drive/Genesis (as opposed to add-ons such as the Sega 32X and Mega-CD). Initially released in 1994, the Saturn was a 32-bit compact disc-based system, and was a key player in what is now widely known as the fifth generation of video game consoles. The Saturn was first released on November 22, 1994 in Japan, May 11, 1995 in North America, and July 8, 1995 in Europe.

Depending on where you live, the Saturn could be described as either Sega's most successful console of all time (Japan) or one of their biggest commercial failures (North America). Despite being powerful for its time, its complex hardware and inability to meet rapidly evolving consumer expectations and demands put it in a distant third place in the Western world, but a combination of 2D sprite games, 3D arcade ports and strong marketing campaigns made the Saturn the most successful Sega console in Japan. Estimates for the total number of Saturns sold worldwide range from 9.5 million to 17 million.[1]

The following 20 pages are in this category, out of 20 total.