Back to: Sega Saturn. 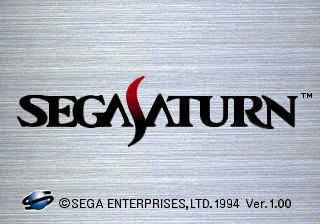 All variants of the Sega Saturn come pre-installed with a boot ROM - an interface which appears when the console is given power. CD-ROMs require verification and loading, which depending on the quality of the disc or drive, can take several seconds, so in addition to driving the CD-ROM, the Saturn's boot ROM informs the user that console is working. It fulfils the same function as seen with the Sega Mega-CD's boot ROM, though unlike that console the boot ROM is always seen, as there is no fall-back to the cartridge-based Sega Mega Drive.

Usually if the console detects and verifies a disc, the Saturn boot ROM is limited to a introduction and jingle, followed by a brief Sega licensing screen and finally, the game. Should a compatible Saturn disc not be detected (detection also requires the console's lid to be closed, as the disc will not spin otherwise), the user is taken to a menu. 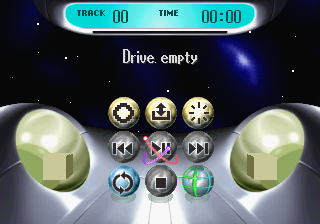 English menu with no disc inserted.

Compared to the Mega-CD (and indeed most of its console contemporaries and even the Sega Dreamcast), the Saturn boot ROM menu is far more elaborate. It is also largely consistent across regions, with the core feature set being shared across all consoles manufactured across the decade.

Like the Mega-CD, the Saturn is compatible with music CDs and CD+G discs, and so the Saturn menu offers controls for these features. It also has built in memory for save data which can be managed through the boot ROM. New to the Saturn is a global system language stting and a real-time clock to set. If the console has failed to keep time (because for example, the battery has died) the user will also be prompted to set the time when the console boots.

The Saturn's capabilities as a CD player is perhaps higher than it ever needed to be. In addition to playing compact discs normally (and being able to repeat either the whole disc or selected tracks), it can perform real-time pitch shifting of the audio, mute the vocals (assuming said vocals are mixed so that they're in the "middle" of a stereo recording rather than panned to the left or right), adjust the "surround", shuffle tracks and repeat specific parts of tracks. The left and right sound channels are also visualised by two spinning, colour-changing cubes.

In addition to this, the menu sits on top of a rotating background with 3D starfield. The user can hide the menu, to reveal a 3D spaceship which moves around and spins.