GEMS (Genesis Editor for Music and Sound effects) is a sound driver for the Sega Mega Drive. It was developed by Jonathan Miller (drivers and firmware), Burt Sloane (programming), Chris Grigg and Mark Miller (concept and design) of Recreational Brainware by Sega of America's request, and mainly used by western developers.

The software integrates a programming language that can be built into the composition file and is context-sensitive to gameplay events within the game itself. This is acomplished by setting aside shared memory space that will allow the sound driver to comunicate with the game and vice-versa. Using this technique, the music can change to reflect conditions within the game. For instance, it can be used to track the number of enemies onscreen and change pitch or tempo when a certain threshold is reached or it can be timed to play when certain effects, such as flashes of light, are used. 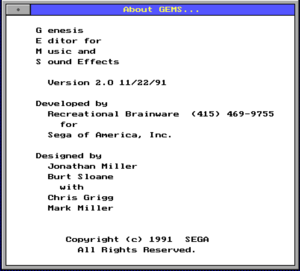 While in games using other drivers, such Alien Soldier, Dick Tracy or Shinobi III basic behaviour such as playback speed is controlled by a single variable (which can be easly manipulated by an action replay or hex editor), GEMS has to change the data of the whole music track stored on the ROM for the same effect. This can be easily noticed by comparing data in partially PAL optimized games, such as Cool Spot.