Shaq Fu is a Sega Mega Drive fighting game developed by Delphine Software International and published by Electronic Arts. Endorsed by and starring American professional basketball star Shaquille O'Neal (also known as Shaq), it was first released in the United States and Europe in October 1994, and also saw an American-exclusive Sega Game Gear port the following year courtesy of Tiertex.

Shaq Fu is most notable both for its extensive use of Delphine's distinctive rotoscoping techniques for visibly-fluid fighter animations, and for its unfortunate modern reputation as one of the worst video games ever released. Unlike other games which legitimately deserve the title, Shaq Fu is instead a victim of other factors: the novelty of its seemingly-bizarre premise, its strikingly-campy kung fu film-inspired title, and most importantly, that it stars a recognizable and humorous celebrity personality in a fighting game. In recent years, Shaq Fu has since seen a critical re-evaluation as a fairly standard fighting game with smooth animations and competent gameplay.[5][6]

Long ago and far away, in a place called The Second World, there ruled the heartless sorcerer Sett Ra. His hunger for power still gnawed at him even though his dominance over the Second World was unchallenged; he longed to extend his grasp to the fair First World, Earth.

Sett Ra's Plan was simple. He would destroy the Pharaoh of Egypt and usurp his throne. He created a perfect assassin from his own shadow who would serve him without question. This shadow became beast, the mightiest and most loyal of all Sett Ra's minions. Beast destroyed the Pharaoh, and the disguised Sett Ra soon sat upon his throne.

However, the Pharaoh son Ahmet was not deceived. He brazenly confronted the powerful sorcerer, threatening to reveal him. Sett Ra escaped from the palace to the Great Desert, where his grandfather, Leotsu the Wise, dwelt as a monk and hermit. Leotsu and Ahmet united with a coven of powerful wizards from the lands beyond Egypt, and their combined power was able to send Sett Ra back to the Second World, comatose and imprisoned within a rune-encrusted pyramid. He slumbered for a millennium, bound by the wrappings of a mummy. Beast roamed the Second World, dedicated to finding and releasing his dread master. Successful at last, Beast and Sett Ra vow to wreak havoc on those who stopped them before.They have gathered a battalion of formidable fighters to further this end.

To regain his full strength and to end his exile from the First World, Sett Ra must perform an ancient ritual upon a descendant of Ahmet. Beast has now returned from Earth with the child Nezu, a child in whose veins the royal blood runs pure. All is ready for the final cataclysmic battle-only the Chosen One can stop Sett Ra now. One who possesses strength, spirituality, courage, agility, intelligence, and unsurpassed skill in the martial arts. Where will the world find such a one? Only Shaq knows. 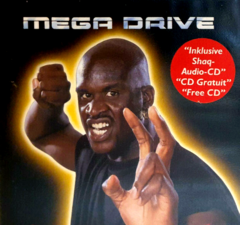 Included for free with specific copies of Shaq Fu was a CD single performed by Shaquille O'Neal, Shaq Fu: Stand and Deliver. Containing the rap song Stand and Deliver, the CD came enclosed in a small cardboard sleeve which fit inside the main box, and was also available for mail order directly from the publisher itself.

Compared to the original Mega Drive version, the handheld Game Gear port features a selection of only six playable characters, and lacks both the original game's tournament mode and its digitized voice samples.