The game was a launch title in North America, and later on in the console's lifespan, Sewer Shark was distributed as a pack-in game with the Mega-CD console in certain regions.

The game takes place in a post-apocalyptic future where environmental destruction has forced most of humanity to live underground. The player takes on the role of a rookie pilot in a band of "sewer jockeys," whose job is to exterminate dangerous mutated creatures to keep a vast network of sewers clean for "Solar City," an island paradise from which the malicious Commissioner Stenchler gives his orders and critiques.

The player's "Back Seat" (copilot), Ghost, evaluates the player's performance throughout the game, while a small robot named Catfish scouts ahead and gives directions. The player is also in communication with Falco, a female jockey who believes that there is a hidden route to the surface.

The game is a rail shooter that uses full-motion video gameplay backdrops. The player pilots a customised "sewer shark" vehicle named the Hole Hawg through a series of sewer tunnels (called "tubes"). The player is tasked with cleaning up the large sewer network by shooting various creatures. Despite being labeled as the "sewer jockey" (pilot), the ship mostly flies itself, leaving the player to shoot "ratigators" (mutant crosses between rats and alligators), bats, mechanical moles, and other sewer denizens. The player aims the targeting reticle with the D-pad and fires the ship's "Gatling gun" with

(which can be held for continuous fire).

Along the way, Catfish gives the player directions by announcing the next three tube jumps using clockface directions (twelve for up, three for right, six for down, and "niner" for left). The tube jump indicator at the top of the screen indicates when the player is approaching an intersection by flashing an arrow green. The player can commit to turning in that direction by pressing

and then the direction of the jump. The arrow flashes yellow to confirm the turn, and the Hole Hawg automatically makes the jump when the tube approaches. If the player takes a wrong turn or misses a turn, the Hole Hawg eventually hits a dead end and crashes, ending the game. Wrong turns and missed turns are indicated by the arrow flashing red in the tube jump indicator. Directions are randomized and must be taken in order. Later in the game, Catfish is replaced by the "crazy-looking thing," which the player must visually chase through the sewers.

The Hole Hawg cannot be damaged, but it has a limited amount of energy, which depletes slowly during flight and while firing. This energy can be partially replenished at recharge stations. Ghost announces when a recharge station is approaching, and they are indicated by two lights on the ceiling of the tube. The lights correspond to the entrances to the station: one light is green (representing the open entrance) and the other light is red (representing the closed entrance). The player must jump into the open entrance to recharge the Hole Hawg. Jumping into the closed entrance incurs no penalty but does not charge the ship. If the ship runs out of energy, it crashes and the game ends.

Enemies are a mixture of creatures baked into the full-motion video and sprites overlaid on the screen. Shooting down creatures contributes to the player's score (depending on the "weight" of the creature). At certain times, Ghost or Stenchler interrupt the player to give direct feedback. If the player is doing well, they are allowed to continue and are occasionally given a promotion in the form of a new callsign (progressing from Dogmeat to Ratbreath, Exterminator, and finally Beachbum, each accompanied with a change of music). Poor performance eventually causes the game to end.

When the player progresses deeper into the sewers, the ship encounters pockets of hydrogen must be detonated to pass through safely. The HUD has a gauge underneath the player's callsign that indicates the hydrogen level; when it turns red, Catfish can fire a flare to detonate the hydrogen with

The game features numerous short full-motion video cutscenes that break up the action and progress the plot. All in-game music is generated by the Sega Mega Drive's audio chips, as opposed to higher quality Red Book audio.

As with Night Trap, Sewer Shark was originally intended for release on Hasbro's cancelled Control-Vision (codenamed NEMO) console, a system that used VHS cassettes as opposed to ROM cartridges. Digital Pictures subsequently picked up the rights to bring the project to the Mega-CD.

On the Control-Vision, Sewer Shark, like Night Trap used four separate video streams which are read simultaneously, allowing for the game to react without the need for noticeable loading of data. To achieve this on the Mega-CD, all of the footage was compressed using a bespoke video codec, meaning most of the game is viewed with a border. Night Trap uses similar technology, as does the later produced Prize Fighter.

In North America, 100,000 copies of the Mega-CD game were sold prior to being packed-in with the console[9].

Following its Mega-CD launch, Digital Pictures ported the game to the 3DO platform for release in 1994. While gameplay remains largely unchanged, the 3DO version renders at a higher resolution in more colours, bringing the footage closer to the intended VHS quality.

The events and characters depicted in this photoplay are fictitous. Any similarity to actual persons living or dead is purely coincidental.
Ownership of this interactive U-Direct™ motion picture is protected by copyright, patent, and other applicable laws. Any unauthorized duplication, distribution, or exhibition of this interactive U-Direct motion picture could result in criminal prosecution as well as civil liability.
Filmed in Hollywood, California and on location at Sunset Beach, North Shore, Oahu, Hawaii.
Sewer Shark, Ratigator, Zerk, and Crazy Looking Thing are trademarks of Hasbro, Inc.
U-Direct is a trademark of Digital Pictures, Inc.
Portions © 1992 Sega
© 1992 Digital Pictures, Inc. All Rights Reserved. 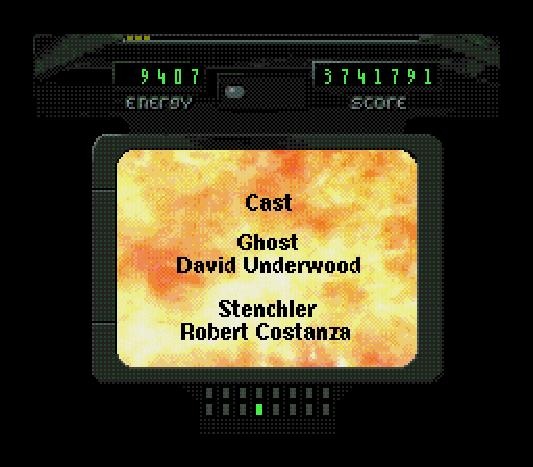