For other games with the same name, see Jurassic Park.

Jurassic Park (ジュラシックパーク) is a Sega Mega-CD full-motion video graphic adventure game developed by Sega Multimedia Studio and published by Sega. Based on the June 1993 film Jurassic Park, the game was first released in the United States and Europe in December 1993, and was developed in coordination with the film's production team, notably enlisting the help of prominent dinosaur paleontologist Dr. Robert T. Bakker.

Set after the events of the film, a group of scientists is sent to collect dinosaur eggs at InGen's Jurassic Park, a theme park that is populated with genetically engineered dinosaurs and is located on the fictional island of Isla Nublar. After the group's helicopter crashes on the island, a survivor, the player, receives a video message from Emily Shimura, a computer expert. Shimura states that the crash was the result of sabotage orchestrated by InGen's corporate rival, Biosyn Corporation, which paid to have a bomb attached to the helicopter.

A second helicopter is sent to rescue the player, but it is also compromised by Biosyn, which has sent out its own team to steal the dinosaur eggs. When Biosyn's helicopter arrives, the company's agents are tranquilized by the player, who uses the helicopter to escape the island.

Jurassic Park is a point-and-click adventure game. The player must search Isla Nublar to retrieve eggs from seven different dinosaur species and place them in an incubator at the Jurassic Park Visitor's Center. The eggs must be collected within a 12-hour time limit; at least one egg from each dinosaur species must be collected to finish the game. The player can view the collected eggs with  START . The time ticks down faster than real-time, and traveling to different areas costs time. The player can freely explore the island, though some areas require particular items in order to progress.

The game is played from a first-person perspective, giving the player a panoramic view of the surroundings. The player can move the cursor around with the D-pad. It pans the view when moved to the edges of the screen. The cursor changes to an arrow when the player can travel in a direction, which can be done with

. The player can find items in the environment, which must be used in a variety of ways to complete the puzzles in the game. The player can pick-up, inspect, or use items with

. The inventory of items can be invoked with

. Among the items are a trio of weapons that the player can use to contend with the dinosaurs in the game. None of the weapons (a stun gun, tranquilizer darts, and gas grenades) are lethal and all of them have limited ammunition, so the player must use the weapons strategically or avoid engaging with dinosaurs outright.

Paleontologist Robert T. Bakker makes video appearances throughout the game to provide the player with hints and dinosaur information, via special kiosks that are located near dinosaur paddocks. Shimura also provides the player with information through video messages.

The player has a health bar and can take damage from dinosaurs. Some dinosaurs are outwardly hostile, but others only harm the player if provoked. The player can heal using the first aid kit in the Visitor's Center. The game ends if the player runs out of health or time, but it can be continued from the last saved game. 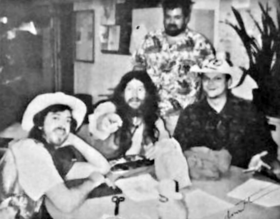 The game was originally supposed to use three different perspective. The game designers eventually decided to focus on the first-person perspective and making a point-and-click adventure game.

Sega enlisted the support of Dr. Robert T. Bakker, a prominent paleontologist who advised the production of the Jurassic Park film, for the Mega-CD tie in. He wrote a "field guide" for the seven species of dinosaur featured in the game, and features as part of the production's full-motion video segments.[12] To better explain to the designers and animators how dinosaurs likely moved, Bakker dissected a chicken at the Sega Multimedia Studio offices to show how the leg joints operated.[13]