Sega Multimedia Studio was a development division created by Sega of America in response to the multimedia revolution of the early 90’s, featuring advanced audio video creation facilities and a state-of-the-art recording studio. Directly assisting various Sega of America branches, the studio ended up working on nearly two-dozen titles, while also producing two games of their own. 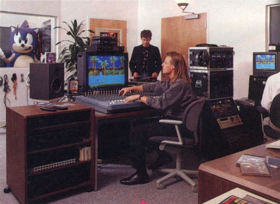 A 1992 promotional photograph of the studio's dedicated recording facilities.

Sega Multimedia Studio was founded in late 1991 by Ken Balthaser to assist Sega of America in audio video development, especially in the area of "multimedia"; that is, the combination of different types of high-quality media that the new storage format of compact discs offered. Now seen as a speculation-fueled bubble that grossly overestimated consumer interest, Sega of America was allowed to join in as well, thanks to it's overwhelming success with the Sega Genesis. The studio would assist in the development of media-based games for the new Sega CD, such as the platform's FMV titles. Additionally, it's support bolstered the cutting-edge, "better than Nintendo" corporate image Sega of America had created for the United States market at the time.

Al Nilsen recalls famed Sega collaborator Michael Jackson visiting the studio a number of times during its existence. While this statement was not elaborated upon further, Jackson's visits took place roughly during the time Sonic the Hedgehog 3's development was seeing its conclusion, with speculation that the artist's famously-removed musical compositions were created through or with assistance from Sega Multimedia Studio.

In mid 1995, the audio department was spun-off into Sega Music Group, and nearly two years later the Multimedia Studio was closed,[1] with many staff moving to Gametek.