Michael Jackson was an American singer, songwriter, and dancer. Regarded as one of the most significant cultural figures of the 20th century, and one of the world’s most successful recording artists, Jackson collaborated with Sega on the production of several video games, most notably Michael Jackson’s Moonwalker[1][2][3] and Sonic the Hedgehog 3. 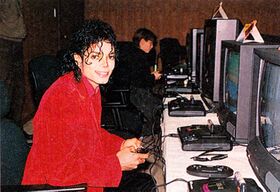 Jackson's love for Sega's video games resulted in a long and beneficial relationship.

After the young star's rise to fame in the late 1980s, Jackson found himself with a significant amount of power and wealth. As with many celebrities from an impoverished background, video games were among one of the first luxuries the artist would acquire en-masse; after the 1988 founding of the star's Californian retreat and amusement park Neverland Ranch, Jackson ensured that the property's dedicated arcade would be fully-stocked with the latest and best arcade hardware, regardless of cost.

The arcade at Neverland Ranch featured a number of high-profile Sega games (most notably his personal R-360[4]), and Jackson would frequently spend long hours with his arcade games, acquiring a more intimate experience with Sega's arcade products than most other players of the day. From these sessions, and from his passion for the personal benefits of video games in general, the artist would keep these moments close to him and even personally identify as a 'gamer' - something that would remain with him his entire life.

Like many fans of video games, Jackson also acquired an interest in their development, and would often leverage his celebrity to keep an ear to the game industry and meet some of his corporate idols. First and foremost among those companies would be the one which intrigued him the most: Sega.

Inspired in part from the creativity of Jackson's 1988 musical film Moonwalker, and from the artist's existing love of Sega video games, the 1990 arcade game Michael Jackson's Moonwalker was the beginning of a long and fruitful relationship between the two globally-recognized names. Based on the popular Smooth Criminal segment of the film, the title is an isometric beat-'em-up game featuring FM hardware renditions of Jackson's songs, and was generally well-received by the gaming public (as was its reimagined home port, Michael Jackson's Moonwalker.)

In December 1992, while Jackson was in Japan for his Dangerous World Tour, he met with Sega of Japan and worked with developers Sega AM5 as a celebrity actor for the upcoming Sega AS-1. Hironao Takeda recalls that Jackson played a complete, English-localized build of what was then known as Scramble Training, and immediately agreed to shoot inserts for further AS-1 ridefilms on the spot.[5] Michael plays a starring role in the titular Michael Jackson in Scramble Training, and appears in a supplementary role in Megalopolis: Tokyo City Battle. However, following the artist's 1993 sexual abuse accusations, Scramble Training was reissued under its original name, notably with the artist's appearances and endorsement entirely removed.[6]

Sometime around early 1993, Jackson became involved in the production of Sonic the Hedgehog 3’s soundtrack. Working through collaborator and tour keyboardist Brad Buxer, and bringing five additional members of his associated sound team to the game, he produced a number of compositions for the project - likely through the recording facilities of Sega Multimedia Studio. Upon hearing his music translated to the Sega Mega Drive’s FM sound hardware (specifically the "crunchy" sample playback of Sonic 3's sound driver), Jackson left the project, citing displeasure in hearing these original compositions in such a relatively-limited format. Contrary to popular belief, the decision was unrelated to the artist's 1993 sexual abuse accusations.

Depsite Jackson removing his music from the project, his sound team would remain to compose some of the game's final soundtrack, and either through tribute or inspiration, allusions to Jackson’s musical style were incorporated into several songs. Much of the game’s new jack swing themes can be attributed to the influence of Jackson and his sound team, and Carnival Night Zone's theme even directly samples the Jackson song Jam. The soundtrack also features motifs commonly associated with the artist, such as rhythms being punctuated with the occasional “woo!”.

Jackson’s presence in the final Sonic the Hedgehog 3 is mostly limited to inspiration, but two of his original compositions are thought to have remained in the retail release: Staff Roll is said to have been directly composed by Jackson, with its general chord progression being reused for the artist's 1995 song Stranger in Moscow, and the distinctive rolling drum beat of Knuckles’ Theme (and by extension, Sub-Boss Theme) had been previously co-composed by Jackson and Buxer for the 1991 recording of Blood on the Dance Floor.

In 1993, Michael Jackson was famously accused of sexual abuse. Though the case was eventually closed with no charges pressed, the artist's public image and commercial viability were significantly affected. While neither Sega of Japan or Sega of America officially made any statement on the matter (with both remaining open to working with the artist), Shuji Utsumi mentions a hesitancy to pursue any new projects with Jackson, and this sentiment would be mirrored by at least one unnamed Sega of America executive (post the artist's Sonic the Hedgehog 3 departure).

While magazines occasionally reported on a possible Moonwalker 2, it appears to have been largely speculative: reportedly, a sequel to Moonwalker was considered, but never properly developed, and while Sega staff on both sides of the Pacific mentioned a desire to pursue future projects with Jackson, only Sega of Japan appear to have had anything in actual planning. Ultimately, Sega's unstated policy would be implemented as a simple "cooling period" placed on their current relations with the artist, and any planned or future collaborations would be placed on hold. 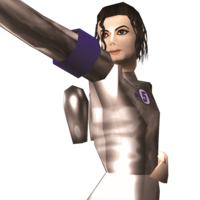 Despite the late request, Tetsuya Mizuguchi and his team were more than happy to include Jackson in the game.

In 1999, Jackson was shown a near-finished version of the Sega Dreamcast rhythm game Space Channel 5 and was enamored with it, requesting if there was a possibility of including himself as a cameo in the finished product. Producer Tetsuya Mizuguchi initially wanted to refuse the request as the game was only a month away from being finalized, but once the larger development team caught wind of Jackson's request, they endeavored to include him regardless. The team quickly substituted a Morolian-controlled NPC dancer with a model of Michael Jackson and created animations for the artist's signature dance moves.

Due to the cameo's short development time, the developers were unsure of how Jackson would react. To Mizuguchi's surprise, he approved, and realizing the pressures the team were under at that point, even personally contributed to the project: Jackson quickly recorded a number of voice lines for his cameo, and altogether Space Channel 5 was able to be finalized on time with a fully-voiced and officially-endorsed cameo by one of the world's largest celebrities.

Jackson collaborated with developer Midway Studios San Diego on the 2000 Sega Dreamcast boxing game Ready 2 Rumble Boxing: Round 2, appearing in a cameo role as one of several celebrity boxers. Appearing in the company's studios to be digitally motion-captured, the artist recorded both animations and voice lines for his respective character; notably, the latter would be downpitched to give Jackson a deeper voice.

As one of the world's most-recognizable celebrities, Michael Jackson inspired a vast number of listeners and fans in a variety of ways, something which into the world of video games. Although references to the moonwalk and allusions to Jackson's signature's dress remain frequent-enough sightings in any form of media, the artist's largest influence on video games would be his character himself. Jackson was one of Japan's most well-known celebrities, and alongside others like Andre the Giant and Mike Tyson, found his unique identity quickly become a common trope of the country's media. This familiarity among the Japanese public resulted in a number of Michael Jackson look-alikes appearing in movies, games, and manga.

From his very inception, Sonic the Hedgehog was significantly inspired by Jackson’s celebrity. As one of the world’s biggest pop stars, and one whose fandom easily made it to Japan, character designer Naoto Oshima borrowed Michael’s smooth “coolness” as an inspiration for building the mascot. Sonic’s famous buckled shoes were also directly inspired by Oshima’s viewing of Jackson’s 1987 album Bad.