Hironao Takeda (武田 博直) is a former Japanese businessman, engineer, and director. After initially working in commerce at CSK, he joined Sega in 1988, and became one of the longest-standing members of its AM5 division.[2] Under it, he led the development of numerous mid-size and large attractions, primarily for the company's Amusement Theme Parks and other entertainment venues.

Following AM5's diversified restructures to Mirai R&D and later Family Entertainment, Takeda retired from Sega in 2011.[2] During and after his time at the company, he has additionally volunteered to work with attraction-related organisations, and wrote numerous scholarly articles, lectures, and blogposts about the projects he was involved with, several of which have been made accessible online.[3] 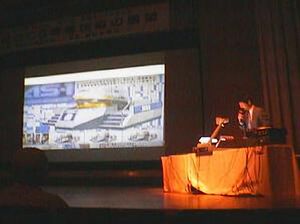 Takeda, performing a speech concerning his AM5 projects (including the pictured AS-1 motion simulator) for the 3rd Shobi World Forum conference in 1999.[4]

After his January 1951 birth, Hironao Takeda pursued commerce work, and graduated from Kobe University in 1976. His professional career started at MODEC in 1978, before moving in April 1982 to develop new businesses under CSK, where he would work for six years. Two years after Takeda's recruitment, the company acquired Sega; he would later transfer to work under them in April 1988.[2] Changing tack considerably, he became involved in leading amusement equipment design and engineering at what would eventually become the AM5 division. During his time there, he was a Development Manager, directing much of its work.[5]

Of the division's earliest projects, Takeda particularly influenced the development of the AS-1 motion simulator and its ridefilms, including Muggo! and Scramble Training. The films gave him the opportunity to work and negotiate with famous overseas collaborators Douglas Trumbull and Michael Jackson, respectively. As a result of the success of the AS-1 in Japan, it was exported overseas and used as a base in numerous other AM5 attractions for Sega's emerging Amusement Theme Park venues, including the VR-1.

The initial success of these attractions would lead to Takeda's eventual appointment as director of the Virtual Reality Society of Japan,[1] also precipitated by his numerous scholarly articles and voluntary work. He additionally gave out many speeches and lectures, including one on Sega itself as part of the Osaka Industrial Association's New Product and New Business Development Study Group in August 1993.[6]

In the midst of a restructuring that saw Sega's theme park prospects cut back and numerous developers depart during the late 1990s, AM5 became Mirai R&D. Takeda stayed with the downsized division, working on a smaller number of attractions as well as more diversified entertainment projects such as Fish "on" Chips.[7] Though also involved in tentative plans for a new Joypolis location in South Korea,[8] this and new 3D projection technology he jointly developed during 2004 would ultimately never materialize.[9] Mirai R&D eventually enjoyed success again with Mushiking and Love and Berry, two highly popular trading card arcade game series for children; nonetheless, Takeda regretted not working on these alongside personnel who had since left the company.[10]

Following the eventual closure of the once more-renamed Family Entertainment in 2010, Takeda retired from Sega in 2011.[2] Since leaving, he has been involved in more volunteer work; alongside republished scholarly articles,[11] he has made his 1993 lecture on the company accessible through his blog with the addition of numerous retrospective postscript additions,[6] as well as a new series of articles recounting the development of his AM5 projects and the history of virtual reality.

Alongside the likes of Hiroshi Uemura, Takeda was one of the longest-standing directors under the AM5 division. His work on the AS-1 in particular became the base of the division's further attraction works over the course of the decade; as well as collaborating on its ridefilm content with famous overseas artists, these effectively became career launchpads for future prolific Sega developers, including the aforementioned Uemura, Tetsuya Mizuguchi, and Kenji Sasaki. The later documentation of Takeda's projects in his scholarly writing and speeches to universities has also given greater understanding of them to others.