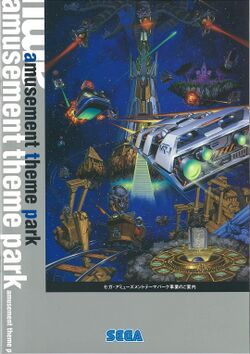 Amusement Theme Park (アミューズメントテーマパーク), commonly abbreviated to "ATP", was a concept created by Sega to describe its indoor theme park venues during the 1990s, beginning with Osaka ATC Galbo and Yokohama Joypolis in 1994. Managed by the Amusement Theme Park Division in Japan and regional offshoots in overseas territories, the parks were designed to establish the company as a major force in global location-based entertainment and expand their customer base through providing high-tech interactive attractions to families, with the addition of other amenities including food/drink, retail, and the capacity for regular officially-held events.

With many of the parks beset by managerial problems leading to poor business decisions and cashflow issues, the proposed target of at least 100 locations around the world by 2000 was never achieved. Thusly, the majority of the venues opened under the concept either closed permanently or downsized in the midst of a restructuring at Sega, as well as a worldwide decline in the amusement industry. Out of the thirteen venues opened during its active period, only the flagship Tokyo Joypolis remains operational under CA Sega Joypolis, though a small number of new parks including Qingdao Joypolis have also been developed since the discontinuation of the concept.