SegaWorld London was a Sega World indoor theme park opened by Sega. Housed within the London Trocadero complex, the site became the flagship Sega amusement centre in Europe upon opening in September 1996, and was the first theme park venue to be opened outside of Japan by the company.

It was claimed to be the largest indoor theme park in the world, occupying an area of 10200m² on seven floors[3] and making it the largest venue to be developed and wholly ran by Sega, but has since closed permanently. Parts of the park were ran as an unrelated amusement arcade into the early 2010s. 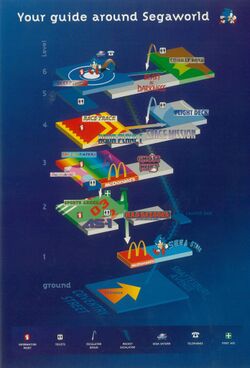 Taking up over 100,000 of the Trocadero's 600,000 square feet, SegaWorld London was a seven-floor indoor amusement theme park. Whilst billed as such, much of its floor space was taken up by its large amount of coin-operated arcade machines, including full-size deluxe iterations of games and imported versions scarcely seen elsewhere in the UK. Alongside numerous other Sega venues, it was specifically used for the location testing of both upcoming and never-released titles, as well as holding occasional officially-organised events.

After entering the Trocadero building through its shopping arcade area, visitors would be taken up the "rocket escalator", (16.43m in length (with 80m of handrail), 31.5 tons in weight and 193 steps[4] (although it was technically two escalators, not one)), running through the main atrium containing other Trocadero tenants, to the sixth "level" (floor). This acted as the park's reception, with each subsequent floor based around differing themes and concepts. The arcade machines on these floors were generally kept in line with the designated theming, and various other attractions and amenities could be found between them, including a McDonalds restaurant and other refreshment stalls.

The subsequent floors themselves were connected and accessible to visitors by working their way down a further series of escalators and travelators, frequently situated on the left and right sides at the top of the Trocadero's main atrium area, as well as several static staircases. Also originally located in the atrium was the official Sega Shop, which sold merchandise exclusive to the park and small quantities of other consumer products created by Sega. Alongside a second McDonalds outlet directly opposite it, the retail unit that housed the shop was positioned to the left of the bottom of the exit escalator, until the shop's later upstairs relocation to the Sports Arena.

Following Sega's removal from the facility, portions of the floors were redesigned extensively.