Dennou Senki Net Merc (電脳戦記ネットマーク, Cyber Troopers Network Mercenary) is an arcade game developed by AM3 with assistance from Virtuality.[2] One of several attempts made at virtual reality by Sega, it is the only game created for the Sega Net Merc system (a specialized arcade cabinet using Model 1 boards with the Mega Visor Display headset to produce virtual reality visuals), so the two are often used interchangeably. If considered to be a Model 1 game, it is the final release for the system.

As a result of criticism, lack of new Model 1 board stock, and numerous delays since the initial agreement between Virtuality and Sega in June 1993, Dennou Senki Net Merc received a very limited release, with few units appearing outside Japan.[3] It has remained an obscure and rare footnote.

Dennou Senki Net Merc is an on-rails first person shoot-'em-up, in which players use a large gun controller to fire at enemies. Also being a virtual reality game, players are also given a VR headset (a "MVD" or "Mega Visor Display"[4], used previously by the VR-1 theme park attraction), allowing for their head movements to be tracked in real time and therefore see a full 360 degree view of their various in-game surroundings.

The game itself is a straightforward arcade shooter; no set time limit is provided, however a depletable health bar is used to curb time. Players are always stood facing in one direction behind the gun controller during gameplay. The complex nature of the system means that a member of staff is usually on hand to assist users with the headset. Gameplay is also outputted for onlooking bystanders onto a monitor attached to the play field.

Dennou Senki Net Merc takes place in four levels; though the start and end stages remain the same on any run, the middle two stages can be selected interchangeably.[5] 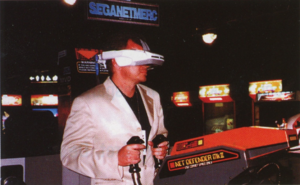 Despite its negative reception at AOU Show 1995 and several delays, Dennou Senki Net Merc was ultimately kept on Sega's release schedules for May.[1] It is suggested by main programmer Andy Reece that this was due to a successful location test at Ikebukuro GiGO in the preceding months, whereupon the game apparently outperformed Daytona USA on its original trial weekend.[3] However, a shortage of Model 1 hardware also said to have affected other later releases meant that very few units could be made and sold to arcades - despite Sega's initial intent to ship 2,000 VR units as part of their partnership with Virtuality,[6] retrospective estimates of total Net Merc machines manufactured range from less than 20[7] to 70.[3]

Dennou Senki Net Merc appears to have been most frequently installed in Sega's own amusement facilities; at least 10 had received it by August 1995,[8] including O2 Park Sega World, Shinsaibashi GiGO, and Osaka ATC Galbo.[9] Very few units are thought to have been exported outside of Japan, however it is known to have reached Metropolis,[10] SegaWorld London,[11] and Sega Park Madrid;[12] others were supposedly planned to appear in Sega World Bournemouth and Sega VirtuaLand.[13] Net Merc units were also found in Korea[14] and New Zealand in the late 1990s and early 2000s.[15][4]

Despite using the critically-acclaimed Mega Visor Display headset, Dennou Senki Net Merc is retrospectively not considered to have been as influential as Virtuality's other works, remaining an obscure rarity as a result of its low production run and resultant lack of popularity. Most installations likely were removed by the early 2000s, and no further games are known to have been developed for the Net Merc system after the release of Dennou Senki Net Merc.

Design motifs associated with it and the MVD would eventually live on in the AM3-developed Cyber Troopers Virtual-On, in which the headset was incorporated into the Virtuaroid mechs.[16] Rumours also circulate which suggest that Cyber Troopers was originally intended to be a release for the Net Merc system.[17]

As a result of its low production run and poor reception, very few boards for Dennou Senki Net Merc are known to currently exist. It is believed only two remain with incomplete/faulty Sega Net Merc systems; one is held by arcade collector Eric "ShouTime" Chung,[21][22] while another was acquired and recorded for the "SEGA MODEL KING" YouTube channel, making it the first known footage of the game recorded off of original Model 1 hardware.[23]

Dennou Senki Net Merc was dumped by ShouTime during 2014, however it remains the only Model 1 game to have compatibility and playability issues when ran conventionally in MAME due to its virtual reality visuals and hardware discrepancies. A workaround can be purportedly attempted by reconfiguring the game's dip switches, though if not done properly causes serious graphical issues and is not possible with some versions of the emulator.[23]