Intended as a pilot park for the concept,[4] the venue was significantly outclassed in size by the full-scale Yokohama Joypolis upon its opening a few months later, and would close permanently in September 2007 after downsizing and becoming a Sega World game centre in the late 1990s.

Utilising its recently developed resources and initial success in developing game centres targeted foremostly at families with the short-lived En-Joint scheme during the early 1990s,[5] Sega of Japan had devised plans that would intend to establish the company as a major player in the worldwide entertainment industry to compete against the likes of Disney.[6] Rivals in Sega's fields were already following the same trajectory - Namco had notably opened their Wonder Eggs theme park in Tokyo during February 1992,[7] with Taito then following suit in 1993, establishing the large Cannonball City facility.[8]

At the same time of the announcement for their collaboration with General Electric on what would later become the Model 2, Sega made its future theme park expansion plans clear.[9] In October 1992, the company outlined that a specific department for planning and running the parks, the Amusement Theme Park Division, had been opened,[10] and that the first facility, a ¥2,500 million mini theme park in the Asia Trade Center, Osaka, would launch during Spring 1994.[9] In the following months, other future components of the plans were revealed, including the aim to open 100 indoor theme parks across the world under the Amusement Theme Park concept, and the basis of the parks being a series of high-tech interactive attractions.[6]

These newly-defined mid-size and large attractions had largely became Sega AM5's work, building on earlier titles such as Cyber Dome and CCD Cart that could be found at a small number of larger Sega venues and unaffiliated game centres in Japan.[11] The later AS-1 and Virtua Formula units, having already been showcased at amusement industry trade shows including AOU Show 1993 and installed at large game centres like Sega World Hakkeijima Carnival House in 1993, were also intended for future use inside of them.[6] Development of these and the park were generally kept secretive. 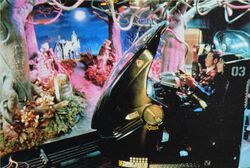 Ghost Hunters, one of the three large attractions that made their debuts at Osaka ATC Galbo upon opening in April 1994

Other aspects of the park included its central fictional theme, the "Destruction of Time" by the scientist "Dr. Chrono", which would see continued use in theming for other early indoor theme parks created by Sega.[13] The theme was conveyed in the park through murals and wall fixtures, as well as information given in promotional material and later on its official webpage. Sega also immediately utilised the venue's larger visitor capacity compared to many of its game centres to positive effect, holding numerous official events including the public opening day. These were often promoted through issues of SegaJack and Sega Magazine in the months that followed,[14] which were handed out free of charge within the park.

Though initially performing sufficiently during its first year of operations,[4] Osaka ATC Galbo was soon vastly eclipsed in size and popularity by the full-scale Yokohama Joypolis, which received more media attention upon its opening day event in July 1994 and acted as the company's flagship theme park venue for the following couple years.[4] Subsequently, two further Galbo centres, Ichikawa Galbo and Yokkaichi Galbo, were opened; unlike Osaka and the then-flagship Yokohama Joypolis, these did not receive software updates to their attractions in September 1995,[15] an aspect of the ATP concept that had been touted for its apparent cost-efficiency.

Few new attractions were added to Osaka ATC after the September 1995 updates, and sometime after late 1998, all of its remaining examples and admission fees had been removed in accordance with the other two Galbo venues, which had not made use of either since 1996 and instead ran as game centres as a result of poor visitor numbers.[16] The restructuring of the scheme heralded the later collapse of the Amusement Theme Park concept, as well as the downscaling measures applied to Sega's game centre operations in the early 2000s[17] - the early targets set for the ATP concept were ultimately never hit (thusly being discarded), and many of the existing parks were also eventually closed permanently over cashflow problems caused by mismanagement and changing trends in the amusement industry.

Shortly after the changes had been made to its operations, the Osaka site was further downsized and renovated to only take up part of the fifth floor, with the Yokkaichi site similarly shrinking and Ichikawa closing permanently. Alongside Yokkaichi, the centre became officially recognised as a Sega World,[18] however this for the most part only affected official recognition, with both still using Galbo branding after the fact. Sega World ATC Galbo closed permanently in September 2007, leaving Sega World Yokkaichi Galbo as the final operating Galbo location until its own closure the following February.