The AS-1 or Advanced System-1 is an interactive motion simulator mid-size attraction developed by Sega AM5.[1] Developed during the early 1990s and released to the world in early 1993 after several appearances at trade shows and collaborative production of ride films with Douglas Trumbull and Michael Jackson, it became one of the signature features of Sega's large amusement facilities in the 1990s, including the Joypolis parks, Sega World venues, and Sega VirtuaLand.

The AS-1 is a medium-sized motion simulator with an eight player capacity. Hydraulics tilt the ride in accordance to the on-screen movement, generated by laserdisc technology.

During the late 1980s, Sega was in the early stages of opening progressively bigger amusement centers in Japan, establishing the family-oriented Sega World chain of suburban venues and eventually others aimed at young adults in urban settings, such as Cineset Sega.[3][4] A central part in their creation and subsequent success was installing machines larger than the typical coin-operated arcade as a main attraction, however internal conflict among developers and designers apparently occurred over the company's amusement operations division renting equipment off of other manufacturers to do this[3] - at that time, Sega were not making anything comparable, hence the substitution of outsourced carousels and miniature train tracks in venues like Fantasy Square.[3][5] 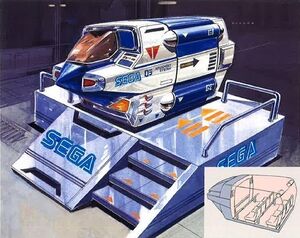 As a result, Sega AM5 was formed in 1989 with the specific aim of supplying equipment for these locations.[3] Its first work released was the successful Waku Waku line of children's rides headed by newcomer Hiroshi Uemura, however Uemura and other AM5 personnel including Hironao Takeda and Shingo Yasumaru soon began development on a larger motion simulator project, inspired by the likes of Disney's Star Tours ride.[6]

Originally known as the "8-passenger simulator" in its earliest prototype model[7] and depicted in early promotional material for the En-Joint concept to resemble a space shuttle,[8] the rechristened AS-1, now designed similar to the early Doron SR-2 simulator,[9] made its first public appearance at AOU Show 1991.[10][11][12] At that time, the simulator was claimed to still be an incomplete prototype.[9]

The AS-1 eventually reappeared in 1992, now running the new ride film Muggo!.[6] During the time since the discontinuation of the En-Joint concept, Sega had engaged in high-level talks with influential American filmmaker Douglas Trumbull,[6] who had recently shifted focus away from films and undertaken work in creating the Back To The Future: The Ride motion simulator for Universal/MCA through Showscan.[13][14]

After a prototype AS-1 was sent to Showscan Corp. in the US for observation, Sega commissioned Trumbull to produce Muggo!. In doing so, he led a team of other film makers including Arish Fyzee to create a 3D/live action ride film.[15] Four would later stay in Japan to work alongside AM5 for a two-week period as a result of unforeseen difficulties in exporting a second prototype unit.[14] During the process of this, AM5 acquired valuable information on multisensory technologies that would be utilised in later works for the company's then-planned indoor theme park venues;[6] with Muggo!, the AS-1 was able to be completed from a technical standpoint and make further appearences.[6]

An incomplete version of the new AS-1 model was first showcased publicly at AOU Show 1992.[16][17] After other successful trade show appearances running Muggo!, Sega took to becoming more involved with creating new ride films for the simulator's wider release in early 1993 through its AM3 development division.[18][19] As a result, two new experiences were to be created for it; one of which, Megalopolis: Tokyo City Battle, was the first project Tetsuya Mizuguchi was involved in.[20][21][18] Michael Jackson, at that time maintaining a friendly relationship with the company and available in Japan as a result of the Dangerous World Tour, was hired to star in the titular Michael Jackson in Scramble Training, as well to play a small role in the pre-show of Megalopolis.[6][22] 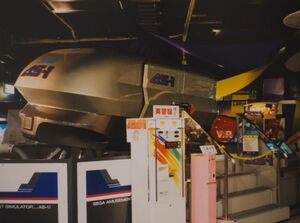 An AS-1 in operation at Sega World Rinkuu

By the following year, it had been defined as a mid-size attraction alongside Virtua Formula, appearing in Sega's Amusement Theme Park venues such as Osaka ATC Galbo and Yokohama Joypolis.[34] Resultant critical reception to the AS-1 in its 1993 and 1994 appearances was positive,[13] however some noted it already showing its age in 1996 when installed at SegaWorld London.[35]

At some point after the late 1990s, the AS-1 was phased out of being installed at Sega venues in large numbers, though not before making a few final appearances in a number of new chain concepts, such as Sega Arena Padou[36], Sega Arena Hamaotsu, and Club Sega Chatan,[37] as well as Umeda Joypolis in a slightly reworked capacity under the new name of "AS-MAX".[38]

For their western releases, Scramble Training and Megalopolis were given an English localisation, however it is not clear whether they were translated elsewhere. Some installations appear to have ran versions of Scramble Training and Megalopolis that did not feature Michael Jackson.[39][18] Other AS-1s, including the former Tokyo Joypolis installation, used non-interactive ride films also found in different motion simulators.[40] None are thought to be in operation in their original form today; a modified version of the former Sega World Sydney unit remains at Luna Park, Melbourne.[41] Others have been found during recent years in Ukraine[42] and Indonesia,[43] though the operational status of these are unknown.

Itself taking inspiration from pioneering rides like Star Tours and Back To The Future: The Ride, the AS-1 was not the very first motion simulator used for entertainment/amusement purposes. However, it was one of the earliest examples that was designed with ease of installation in mind, taking approximately two hours to set up in a moderately sized amusement centre.[6] Shortly after its unveiling, similar medium-sized simulators such as Taito's "IDYA" appeared. Though not all of its experiences offered interactivity, it is also notable for being one of the few fully-fledged motion simulators of its time with a gameplay element.

The simulator's Megalopolis ride film was notably Tetsuya Mizuguchi's first project for Sega.[21][18] It would see further use in the opening sequence for Sega Video Magazine, as well as in the 1994 art film The Gate to the Mind's Eye with a new backing soundtrack composed by Thomas Dolby. The 4 axis motion simulation technology used in the AS-1 would go on to be utilised in a number of larger projects created by Sega AM5, including, most notably, 1994's VR-1. It was later surpassed by a 6 axis system, debuting in Sega Rally Special Stage during 1996.[44]