Virtua Formula (バーチャフォーミュラ) is an expanded version of Model 1 game Virtua Racing. It is designed to run as a mid-size attraction for Sega's theme parks and large amusement facilities.

With a modified edition of AM2's original game as its base, the special mid-size attraction that makes use of it was made by members of AM4[1] and AM5[2] to create a greater spectacle and multiplayer experience than that of the original Virtua Racing deluxe cabinets, previously released in 1992.

Many Virtua Formula setups have latterly been converted to run the later Model 2 game Indy 500; appropriately, this version is called Indy Formula by some official sources.[3]

From a gameplay mechanic front, Virtua Formula is near-identical to Virtua Racing. Its few differences are most noticeable in cosmetic areas, with altered attract mode sequences naturally making use of new title cards and now spanning multiple screens. Replays of laps are now played post-race, and multiplayer is also given further prominence, with an optional "Grand Prix" mode toggle found in the operators test menu. Instead of the standard 4/5, this allows prolonged 20-lap races between multiple players, and is best suited to tournament play.

As one of the most complex racing configurations seen in gaming up to that point, however, Virtua Formula consists of a significantly larger setup compared to all standard and deluxe editions of Virtua Racing. Players are seated in hydraulically actuated Formula One cockpit replicas in front of 70-inch screens. Alongside standard game controls, these feature electronically adjustable seats. Cameras attached to coin towers next to each "car" film real-time footage of players, made clear through light-up "On Air" signs and monitors outputting camera feeds.

Virtua Formula was manufactured in four-player and eight-player setups, both making use of the same parts, though theoretically any number between two and eight cabinets can be linked together (and indeed, one cabinet can act as a single-player experience). A further Model 1 board is used to drive a screen for spectators, showing the action from different camera angles. This is given a pseudo-running commentary by "Virt McPolygon", a letterboxed animated 3D model in the top right of the sceen with text sometimes reflecting what is happening in the race. 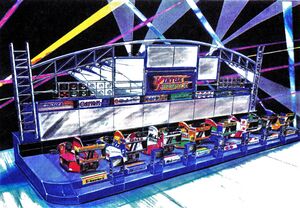 Conceptual design of Virtua Formula, made to visualise the idea early in development during fall 1992[4]

The release of Virtua Racing in 1992 was met with considerable critical acclaim, particularly for the technical and graphical achievements by AM2. Though engineering feats were also made with its standard and deluxe cabinets by AM4, Sega's moves into opening large-scale amusement facilities and eventually theme parks required the creation of bigger showpiece interactive attractions, with Virtua Formula publicly cited as an early example of these.[5] Motivation for developers also came from Ayrton Senna's visit to Sega headquarters the previous year; several desired to create a work which would impress him.[4] Utilising Virtua Racing for this was spurred by the anticipation and popularity it had achieved, naturally being a more cost-effective example.

Production of what would become Virtua Formula was led by AM4 chief Masaki Matsuno; Matsuno had previously been in charge of the deluxe edition of Virtua Racing and other deluxe Sega racing cabinets, such as OutRun.[6] Other engineers included Futoshi Ito and Hideki Inoue designing electrics,[7] as well as Masayuki Yamada handling mechanical design.[8] As the official team for larger attraction equipment, personnel from AM5 were also involved.[2] Focus was placed on multiplayer as a focal point of appeal, with concentration in ensuring the significant amount of screens and hardware would be in sync.[1] Highlighting the difficulties faced in this area, fewer projection monitors than concept art portrayed were used.[9] 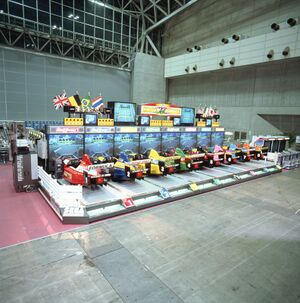 Following an October 1992 announcement,[5] the eight-player version of Virtua Formula made its public debut at AOU Show 1993 in February 1993.[10] The smaller four-player variant debuted at Roppongi GiGO the following month,[11] with the larger model later appearing at Sega World Hakkeijima Carnival House upon its opening in May alongside the AS-1.[12] Its limited release to the amusement industry came shortly after this,[13] as well as a showcasing of the four-player model at Amusement Machine Show 1993.[14]

Both versions were subsequently installed at numerous large-scale amusement facilities and Sega-owned venues in Japan, eventually becoming a part of early Amusement Theme Park centers.[15] Export editions of both were also shipped out to a select number of overseas buyers and Sega operations, with prominent USA examples such as Sega VirtuaLand at the Luxor Las Vegas,[16] and the company's exhibition space at Innoventions in Epcot.[17] Locations in Europe included the UK,[18] Spain,[19] and France.[20]

Eight-player and four-player installations are claimed to have been priced at around ¥96 million and ¥48 million, respectively, on release in Japan. As a result of its high price, many locations charged upwards of ¥500 per credit, though according to Sega this did not deter popularity, with queue lines often seen for it.[4] In the UK, the export four-player edition initially cost £250,000 for arcade operators, and £3 per play for players at the Funland amusement arcade in the London Trocadero (later location of SegaWorld London).[18]

Similar to the progression from After Burner to the R360, Virtua Racing can be seen as the expensive but critically acclaimed culmination of a trajectory started with the likes of OutRun and other taikan racing games by Sega. Masaki Matsuno has personally credited both as his most impressive works.[1] Like the R360, the design features of the unit have also continued to inspire similar "Super Deluxe" versions of Sega racing titles through the decades, such as OutRun 2 SP SDX.

The survival and re-discovery of the game's source code, preserved by one of its main programmers, would turn out to be a deciding factor in the development of Sega Ages Virtua Racing during 2019.[21]

Virtua Formula units themselves are now exceedingly uncommon, largely down to their attraction nature requiring more maintenance than a typical coin-operated arcade machine, as well as further technological improvements rendering its feats less impressive. Many have been converted to run Indy 500 or destroyed.

One of the last known installations of Virtua Formula in its original unconverted form was at a Timezone location in Surfers Paradise, Queensland.[22] Following a large-scale redevelopment of the location, the full unit was bought by former world record holder Joel Hopkins in 2018 for private use.[23]