Roppongi GiGO (六本木GiGO) is a former GiGO venue jointly developed by Sega and Ibis, which owned the hotel it was situated in.[1] Located in Roppongi, a district of Tokyo noted for its nightlife, the venue was at one stage the largest urban amusement facility in Japan,[2] initially creating positive results. Sega are thought to have dropped involvement with the center in the late 1990s.

Inaugurated with a press event on September 10[3] and opened with the aim of becoming a fixture of Roppongi's adult nightlife, Roppongi GiGO was the first GiGO center[4] and the largest urban amusement facility in Japan up to that point in time.[2] Its public opening the following week represented one of Sega's first steps in establishing large scale entertainment centres in prime inner-city locations; the facility's large size, elaborate décor, and themed zones[5] significantly outclassed the Hi-Tech Land Sega and newer Sega World locations opened previously in the country.

For a time, GiGO maintained a high-profile status and popularity among the clientele of Roppongi,[6] generating front-page coverage from The Asahi Shimbun newspaper and strengthening the view of video amusements as a healthy, social form of entertainment;[7] women regularly accounted for about half of the facility's customer base.[7] Celebrities made appearances at the venue, both locally, as a result of its close proximity to TV Asahi's studios, and from around the world - Michael Jackson visited the site in December 1992,[8] alongside other notable figures including Megumi Hayashibara[9] and Christian Fittipaldi.[10]

In the months following its opening, it became the debut location of the four-player Virtua Formula model,[11] as well as a site for numerous events.[12] Roppongi GiGO is thought to have lost Sega's involvement sometime after the late 1990s. It continued to operate as a game center in a downsized capacity under the name of Roppongi Vortex,[13] later closing permanently at the end of 2013.[14] 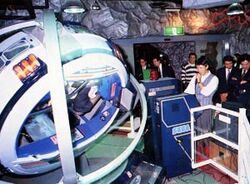 Establishing an organised concept also seen in subsequent GiGO locations, each of Roppongi GiGO's four floors were devoted to specific machines and attractions - the first floor featured video games, including deluxe Virtua Racing and R360 units, the second housed prize redemption, sports games, and a bar,[5] the third featured medal games, and the fourth contained a casino area and karaoke rooms. Customers had to be at least 18 years of age to enter, and 20 to access the fourth floor's casino area.[1]

The floors were featured in segments of the Mega Drive Perfect Video '92~'93 promotional video, with Dream Palace and Royal Ascot machines demoed.