Shibuya GiGO (渋谷ＧiＧＯ) is a former GiGO game center opened by Sega. Launched in June 1999 and designed to appeal to young women in particuar,[3] the center saw Sega experiment further with establishing amusement facilities that targeted a wider range of demographics. Despite its status as a flagship venue and the largest arcade in Shibuya,[4] it later closed in March 2010.[2]

During the late 1980s and early 1990s, progress was made by the Japanese amusement industry in cleaning up arcades/game centers. Alongside rivals like Taito, Sega played a significant part, establishing family-oriented branded chain stores like Hi-Tech Land Sega and Sega World, in which women's toilets, brighter décor, and smoking zones were introduced.[5] However, despite further growth with new large scale facilities in the latter part of the 90s, attendance was falling at some, leading to a re-evaluation of the market and the creation of new venue concepts to replace over 200 closing venues.[6] Shibuya GiGO, the first GiGO location since the mid 1990s and scheduled to open in late June, was seen to be a part of this.[7][8]

When opened on June 26, 1999 in the "I'm ON!" building in Dogenzaka, Shibuya, Shibuya GiGO was one of Sega's first amusement facilities to outwardly appeal to young women specifically, succeeding the earlier Kyoto Joypolis.[9][10] The venue was characterised by its distinctive bright pink décor and emphasis on current trends in gaming, including Sega's Dreamcast console with an official "Dream On!" shop containing a network of 15 playable consoles, and an area dedicated to the then-popular rhythm action games.[1] A makeup corner, purikura photo booth area, and neighbouring tenants such as a Claire's Accessories outlet and bars complemented its targeting of women.[11]

During the months after its opening, numerous features of the GameWave television show were shot on location at the venue. Sega also chose it as one of the three venues in Tokyo to receive the Entertainment STAGE [email protected] internet cafes when launched in August 2000,[12] though this venture was short-lived and swiftly pulled in October 2001 after poor returns. A Studio Sega-branded purikura area[13] and over-20s MJ4 lounge were later added,[14][15] and in 2008 it appeared in 428: Fuusa Sareta Shibuya de for the Nintendo Wii.[16] By March 2010, however, Sega had withdrew from managing the center;[2] Shibuya GiGO's former space has more recently been used for an Adores game center and a pachinko parlour.[17] 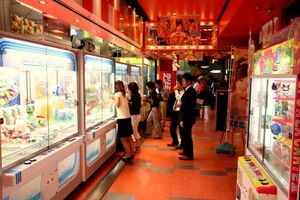 Like the preceding six GiGO venues, Shibuya GiGO was an inner city multi-floor game center/entertainment space, originally taking up three floors of the "I'm ON!" building it was situated in and acting as its most significant tenant.[18] However, when opened, the contents of the floors compared to previous facilities opened under the scheme differed, as a result of it targeting young women in particular.[19]

Later additions to Shibuya GiGO included a small amount of games situated on the first and ground floors. In 2000, an Entertainment STAGE [email protected] internet cafe suite was added to the existing Dreamcast Zone;[20] this was removed months later after the discontinuation of the concept. Other special facilities made added in later years included an over-20s MJ4 lounge under the name of "Spread".[14]