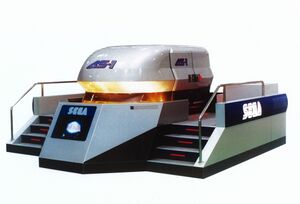 The AS-1 combines an eight-seater motion simulator theater shuttle with interactive ride films.

Mid-size attraction is the official categorised name for medium-scale indoor amusement rides developed by Sega.[1] For Sega Retro's purposes, these can be considered to be noticeably larger than the average coin-operated arcade machine, but smaller than Sega's large attractions.

Though Sega's own official parameters for the category are not clear, mid-size attractions appear to most often be rides that combine limited theme park ride elements with interactive games to provide immersion. Because of their more complex nature than the typical arcade machine, many require supervision by a member of staff, either for safety or maintenance reasons. Unlike the Large attractions, Mid-size attractions can usually be disassembled and moved, though not with the more relative ease that comes with moving most arcade machines, and do not make use of elaborate theming.

The attractions can be installed in the flagship Joypolis indoor theme parks to support larger examples, but are also sometimes supplied to larger amusement arcades and game centers in limited capacities, for example, the Sega Arena venues in Japan, and GameWorks entertainment centers in America. As a result, they are sometimes produced in larger quantities than large attractions, though not in mass numbers. Some have also made rare appearances at non-Sega venues, as well as trade shows and expos, for example Virtua Formula's public debut at AOU Show 1993.

Sega AM5 has largely been responsible for most mid-size attractions; fewer examples have been made since the team and of many of Sega's large entertainment venues went defunct, and most attractions made for the Joypolis theme parks that still exist in Asia can now be classed as large types.

The categorisation was created as part of the Amusement Theme Park concept in 1993, however usage of it has been inconsistent since. Earlier works by Sega, such as the R360, can also be considered to be included under it.