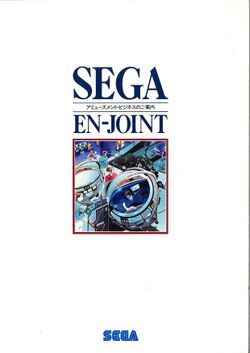 En-Joint was a term coined by Sega to describe its game centres situated in Japan during the early 1990s. It generally involved large-scale venues aimed at mass markets, foremostly families, but also young adults, couples, and adults, deviating from the perceived image of the game centres at that time and attempting to expand Sega's customer base. Though the use of the term was shortlived, the venues opened under it would provide a basis for later initiatives created by Sega, including the Amusement Theme Park venues and locations in overseas territories that also appealed to families.