Hiroshi Uemura (植村 比呂志) is a former Sega engineer and producer. One of the first developers recruited for what eventually became the AM5 R&D lab, Uemura was primarily involved with engineering/developing amusement equipment for families and children. His most significant projects included theme park attractions and children's collectible card arcade games; during the latter part of his career, Uemura also served as a senior executive for Sega Toys. 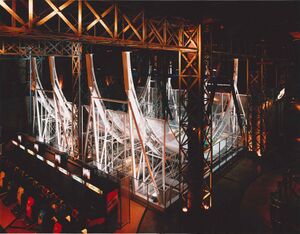 Halfpipe Canyon, one of Uemura's representative works found in the flagship Tokyo Joypolis indoor theme park from opening day. It remains at the park as Halfpipe Tokyo.

Born in 1965, Hiroshi Uemura endeavoured to pursue a career in engineering. After graduating from the Faculty of Engineering at Musashi Institute of Technology, he joined Sega Enterprises in 1989.[2] At that time, the company was in the initial stages of opening its larger amusement facilities domestically,[3] with a newfound need for producing larger attraction equipment that could appeal to families; Uemura's engineering credentials saw him play an integral role in their development at what would become the AM5 R&D lab. His first significant project was the Waku Waku line of children's rides - these were designed to stand out from previous examples with their use of television monitors, and were subsequently a success.[3] Uemura's early projects gave way to involvement in larger concepts, the first of which being the AS-1 motion simulator.[3]

Uemura wrote and directed one of its flagship ride films, Michael Jackson in Scramble Training, visualised by Graphics Technologies, an independent studio led by Kenji Sasaki and other future Sega personnel before the company ordered its own 3DCG rendering software and equipment.[4] Proven to be effective and safe, the AS-1 would go on to be used as the basis for numerous subsequent rides.[3] With Sega unveiling aggressive worldwide expansion of its Amusement Theme Park concept by 1994, these mid-size and large attractions that would populate Joypolis venues became AM5 and Uemura's main line of work throughout the 1990s. Initially involved with Rail Chase: The Ride,[5] Some of the more ambitious projects planned by Uemura came as a result of added space offered by flagship location Tokyo Joypolis in 1996; Time Fall[6][7] and Halfpipe Canyon built on pre-existing concepts with new twists.[8][1] 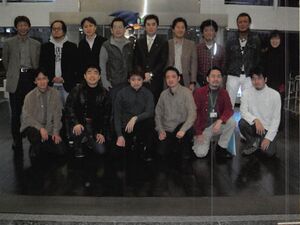 Whilst Sega's theme park business and financial standing declined in the late 1990s, AM5 became Mirai R&D in 1999. Though it would continue work on attraction projects, the restructuring brought forth a renewed focus on other forms of amusement. Using technology first seen in the Aquarena attraction, Uemura followed on from the system's previous utilisation in Sega's Fish "on" Chips restaurant in Gifu and Fish Life software/virtual aquarium by adapting it for use in other environments - first as a virtual menu for Kura Sushi restaurants with Touch de Pon!, and then a children's play device for McDonalds locations with McDonald's no Touch de Asobo!.[1][9] At some point after this, Uemura was promoted to become Mirai R&D's Director.[2]

Uemura's second prolific period at Sega came with a return to his roots of amusement machines for children. Prompted by reflection on seeing an elderly person and grandchild scared by a Joypolis attraction he engineered,[10] Uemura headed the highly successful Mushiking: The King of Beetles collectible card game franchise.[1][9] As Mirai R&D reformed again to Family Entertainment, Uemura took a General Manager position, with another popular franchise in the genre, Love and Berry: Dress Up and Dance!, following.[10] Numerous console, animation, and even physical store spin-offs of these capitalised on the success Uemura created, allowing him to rise in Sega's ranks further and finally become an R&D Creative Officer.[2]

Uemura's more prominent position in Sega during the latter part of the 2000s eventually saw him receive mainstream media recognition in Japan alongside his equivalents in other teams; in addition to coverage from the Yomiuri Shimbun newspaper during 2007, an NHK-produced documentary centered around his day-to-day work for Sega was broadcast on June 22, 2006, receiving a DVD and print release thereafter.[11][2]

With his line of children's card games eventually sidelined over sustainability issues and the flagship Tokyo Joypolis park undergoing its third large-scale renovation by the early 2010s, Uemura retired from Sega in June 2012 whilst initially retaining a Senior Executive Officer role at Sega Toys.[12] He has since taken an executive position at Taito.[13] In 2019, he assisted arrangements for the bonus port of Darius for the Mega Drive Mini with his former Sega colleagues.[14]

Though the limited release of his works outside of Japan have resulted in significantly less worldwide recognition compared to Sega personnel of the same level, the efforts that led to Uemura becoming one of the company's key chief creative officers in amusement development during the 2000s remain among the most innovative and successful in its home market. In particular, the success of Mushiking: The King of Beetles contributed greatly to Sega's improving mid 2000s profits and opened up a new market of children's card games; competitors in the Japanese arcade industry including Namco and Taito have since released similar titles. After his departure, Sega has reinvented two of his most significant works for the 2010s with Halfpipe Tokyo and Shin Kouchuu Ouja Mushiking, as well as commemorating the domestic success of Mushiking through its inclusion alongside other notable titles in its 60th anniversary promotions during 2020.