Halfpipe Canyon (ハーフパイプキャニオン) is a large attraction developed by Sega AM5. Engineered by head planner Hiroshi Uemura to simulate a large skateboarding experience[2] and installed as one of the first main attractions of the flagship Tokyo Joypolis indoor theme park in July 1996,[3] a downsized iteration would later make appearances at other facilities, such as Sega Republic in Dubai.[4] It has since been remodelled at the original Tokyo location to become Halfpipe Tokyo.[5] 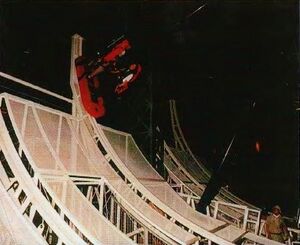 Halfpipe Canyon can be best described as a stand-up pendulum ride combined with a two-player skateboarding game. Structurally and motionally, the attraction most resembles a pendulum ride, however a key difference setting Halfpipe Canyon apart from these is the titular 8 meter high halfpipe.[6] With its series of four large skateboard-like structures which move through large arms connected an upper ride mechanism operated by computer control, riders swing back and forth with a maximum tilt angle of 80 degrees.[6] The boards employ underside tires and an enclosed track to ensure smooth movement.[6]

As with many attractions developed by Sega, Halfpipe Canyon includes a physical interactive element. When players' skateboards reach the top of its swing at a maximum speed of 36 km/h,[6] their team gains points for stomping left-right-left-right on the board's foot pedals in sychronization. If the players time their stomps correctly, the board performs a 360 degree spin, and the team wins points, displayed on a series of monitors. Naturally, the team with the most points by the end of the ride's 2-minute duration are declared winners.[6] When originally installed, Halfpipe Canyon also made use of a DJ booth playing current dance music.[6] 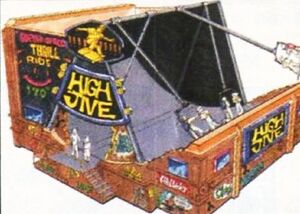 In 1994, Sega launched its Amusement Theme Park concept of interactive indoor theme parks, with pilot store Osaka ATC Galbo and then-flagship Yokohama Joypolis.[7] Though the latter was claimed to be the first full-scale location opened under the ATP concept to properly differentiate itself from mere game centers,[8] few large rides identifiably similar to those in outdoor theme parks could be found within it - one main attraction, Virtua Formula, was little more than a super-sized version of Sega's Virtua Racing coin-op. As a result, Sega AM5 intended to create an attraction which would attempt to move past these limitations.[9]

One of the large projects envisaged by Hiroshi Uemura[2][10] for the next full-scale ATP site, Tokyo Joypolis, was an attraction similar to the large pendulum-type rides found in numerous outdoor theme parks.[9] Uemura and other developers noted their similarity in movement with the sport of skateboarding in halfpipes, and eventually established this as the concept to work around, believing it would add an element of cultural credibility.[9] Provisionally titled High Jive, early elements of the attraction included an enclosed area on one side and boards for each individual rider, though these were removed due to space requirements.[9] 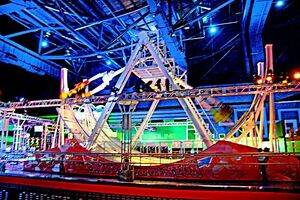 After a press preview featuring the attraction held on the 10th,[11] Halfpipe Canyon first became publicly accessible on the opening day of Tokyo Joypolis, 12 July.[12] As one of the main attractions of the park's initial "First Impression" floor and located to the immediate right of the entrance, the ride received significant attention from most visitors and press.[13] Halfpipe Canyon, Power Sled, and Time Fall were subsequently filmed for the 18/09/1996 edition of Famitsu television series Game Catalog II for a series of challenges hosted by Hikaru Ijūin.[14]

Halfpipe Canyon remained exclusive to the flagship Tokyo location for a number of years, however the first instance of it appearing outside of the park occurred in 1998, when a downsized 4 player version was supplied to the Hokkaido branch of the Sugai Dinos entertainment center chain.[15] Though it is not known when this edition was removed, the same model was likely later relocated to the new Sega-owned Players Arena in Shanghai during 2006, making it the first Halfpipe Canyon location outside of Japan.[16][17] Another 4 player setup would appear at Sega Republic in Dubai during 2009;[4] both venues are now closed. 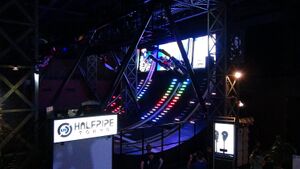 In July 2012, the original Halfpipe Canyon installation at Tokyo Joypolis was revamped as part of major renovations to the park. Renamed Halfpipe Tokyo, the attraction was remodelled to feature LED accents, larger LCD screens for displaying scores and videos, and a electronic dance soundtrack consisting of songs by famous doujin artists, including Masayoshi Minoshima, members of IOSYS, Tsukasa, zts and others.[18]

An official soundtrack album for the revamped ride has been released by Sega as a digital download on Amazon and iTunes, combined with songs from Maimai GreeN, which shares some of the music featured in it.[19] Halfpipe Tokyo also doubles the capacity of the original Halfpipe Canyon, allowing four teams to play simultaneously.