Rail Chase: The Ride (レールチェイス ザ ライド) is a large attraction developed by Sega AM5. Based on the titular Rail Chase series and using its minecart ride concept as the basis for a three-minute long themed roller coaster,[2] the attraction made three appearances at Sega's flagship Amusement Theme Park venues during the mid 1990s. Its final Sega World Sydney incarnation is notably thought to still be in operation in a modified capacity at the Haailand resort in India.[3]

"The archeological diggings of the ruins of an ancient civilization. An archaeologist who has persevered at the digging is finally going to make a historic discovery. However, to open the door to the ruins, he needs the help of the descendant of Princess Luna. Momentously, the door is slowly opened. Dazzling light flashes through the door. Satan in the form of a huge monster comes out. Princess Luna is kidnapped in an instant. You have to rescue the Princess. Your mission is to fight the monsters and rescue the Princess using the "Anti-monster gun", equipped with a laser automatic tracking device, by driving all-around in the *BATTLE BLUSTER* which the professor prepared. The vehicle is ready. Let's move."[4] 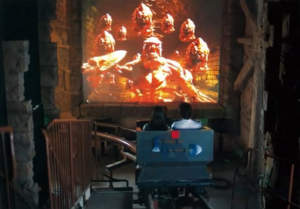 Rail Chase: The Ride effectively acts as a real-life version of the titular arcade game, using turntables and basic target shooting elements to replicate its gameplay. Though differences exist between its three installations, the basic concept of Rail Chase: The Ride remains the same throughout each of of them, with its aim being to simulate the rescue of a captured princess through an obstacle-ridden environment. Riders can achieve this by participating in rudimentary infra-red target shooting areas.[2]

The ride makes use of six gun-equipped minecarts, each with a capacity of two people and a max speed of 25km/h.[2] To heighten immersion and enhance experience, various practical, lighting, sound, and visual effects are used throughout its three-minute duration, such as flashlights, basic animatronics/sculptures, and air.[2] Additions made to its latter two installations include an elevator and theming differences. The rotating turntable used in the attraction to replicate perspective shifts was stated to be the first used in a roller coaster.[2]

For the opening of Sega's first full-scale venue under the Amusement Theme Park concept after its pilot launch with Osaka ATC Galbo, Sega's amusement R&D divisions, primarily AM5, began work on new large attractions that would suit the larger amount of space available.[5] Unlike other attractions developed up to that point in time by the company, a pre-existing arcade series, Rail Chase, was chosen as its basis, likely down to its minecart concept's convenience and adaptability to a traditional roller coaster.

Sega personnel involved with the creation of Rail Chase: The Ride included Hiroshi Uemura, Shingo Dote, and sound designer Hiroshi Kawaguchi.[6] Kawaguchi created an orchestral score for the attraction, utilising over 30 speakers and sensor boards to trigger different tracks.[6] Some aspects of the attraction were outsourced; Masago Industrial handled manufacturing,[7] and popular Japanese character designer Keita Amemiya was commissioned to make an original creation for the attraction's shooting portions.[2] 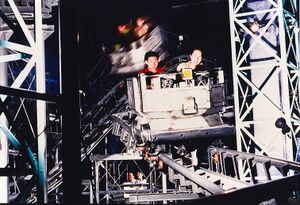 Rail Chase: The Ride first appeared at the July 20, 1994 opening day of Yokohama Joypolis.[8] Situated on the ground floor and one of the three premiere attractions that made their debuts at the park, it later received a minor theming and name update in July 1995 before closing alongside the park in February 2001.[9] Yokohama Joypolis is also notable for being namechecked in the credits of Rail Chase 2.

The attraction's second installation was opened two years later at launch of the second flagship Joypolis facility, Tokyo Joypolis.[10] For this version, the course and theming of the roller coaster was altered, now making use of an elevator alongside a turntable. In late 2000, the ride closed for renovations, and its space reopened at the start of December as the altered Speed Boarder roller coaster.[11]

Its final release and only appearance outside of Japan occurred at Sega World Sydney, opening alongside the facility in March 1997.[12] Aside from theming, it is believed to have initially resembled the original Yokohama version. In 2000, the ride was rethemed.[13] After its sale at auction after the November 2000 closure of the venue, it has remained the only installation of the ride to remain in operation at Indian resort Haailand.[3]