Time Fall (タイムフォール) is a drop tower large attraction developed by Sega AM5. Designed specifically for flagship Sega indoor theme park Tokyo Joypolis[1] and featuring similar components to predecessor freefall rides such as Disney's Tower of Terror, the attraction simulates a malfunctioning time machine experiment, and was purportedly the first indoor freefall in the world.[1] It was later replaced and rethemed to Viva! Skydiving in 2000 after 4 years of operations.

""TIME FALL" is a time machine. It uses the shock of the fall from 128 meters to pass through the time. After boarding the car, the rider puts in the headphones. As it rises a Doctor starts explaining some details. Then suddenly trouble errupts between the Doctor and the maintenance staff, Bob. Are the riders going to be Safe.....?"[2] 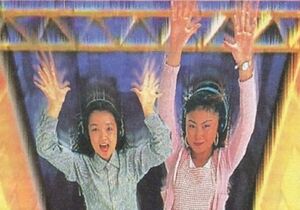 Time Fall is best defined as an indoor drop tower ride; as a result of its indoor restrictions, it cannot reach the heights of significantly larger outside examples, making use of a 13 meter tall drop from the 3rd to 5th floor of its building.[1] Two four-seater carts lift eight riders to its peak, whereupon which they are suspended to give views of the atrium in a similar manner to Tower of Terror, and can also stop mid-way through for effect.

To create the illusion of falling further than is allowed by the towers and convey the theme story, various multimedia and ride components are used. When boarding, riders are given 3D sound headphones to hear dialogue from the attraction's fictional doctor, as well as falling sound effects. While ascending, monitors and a lighting system can be viewed.[3]

Numerous cameras are connected to the attraction. During its running time, recorded footage of the two carts are displayed on the exterior "V Stage"'s projection screen, as well as other monitors throughout the facility.[4] After the three and a half minute duration of Time Fall has been completed, riders can purchase photographs of them taken mid-fall.

In July 1994, Sega opened its first full-scale indoor theme park and Joypolis location, Yokohama Joypolis,[5] as well as a North American test exhibition at Innoventions in Walt Disney World, containing the Virtua Formula and AS-1 simulators also found in Sega's Japanese parks.[6] During the same month, Disney opened its latest addition to Walt Disney World, the Tower of Terror drop tower ride, containing popular features such as its opening elevator doors at its peak, allowing a view of the resort.

By late 1995, plans had been announced for a new Joypolis center in Tokyo, provisionally slated for Ariake[7] but later confirmed to be under development in neighbouring region Odaiba.[8] No wholly new attractions besides Aqua Nova had been unveiled by the company since the opening of the original Joypolis site in July 1994, however as a result of the wider space available at the new facility, a number of larger projects were created by its attraction development division Sega AM5, with Time Fall among those.

Though using similar opening doors at its peak to the Tower of Terror ride introduced by Disney, Sega's attempt at a drop tower would be hindered by the indoor space available - as a result, AM5 put further effort into creating theming and a slow build.[3] The housing of Time Fall would also incorporate a central atrium stage and projection screen. Head planner Hiroshi Uemura rode the attraction in an on location test before the opening of Tokyo Joypolis, however an earlier outdoor test before this by its manufacturer reportedly lacked seatbelts.[9] 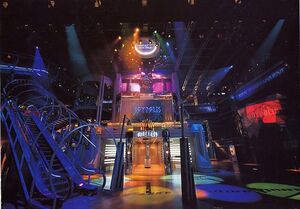 Time Fall first appeared as one of the main attractions of flagship Sega theme park Tokyo Joypolis on its opening day of July 12, 1996, operating on the venue's first floor, "First Impression", as one of its nine newly-developed debuting attractions.[10] It acted as the venue's central attraction, situated in the middle of the main atrium and incorporating its "V Stage" projection screen. In the following months, the ride was filmed for the 18/09/1996 edition of Japanese gaming television show Game Catalog II shot in and around Tokyo Joypolis' site, alongside Power Sled and Halfpipe Canyon.[11]

Some time after August 2000, Time Fall was closed for maintenance, and reopened alongside the refurbished facility on December 2, 2000 as Viva! Skydiving. Aside from using the same basic ride drop tower concept, the update rethemed the attraction to simulate skydiving, through the use of large projection screens and added seat movement.[12] Viva! Skydiving was later removed from Tokyo Joypolis in 2005 after a fatal incident; following this, the attraction's former housing was modified heavily, and did not see any further use as a drop tower ride thereafter.