Cyber Dome (サイバードーム) is a large attraction developed and released by Sega in 1990. Officially dubbed the "Super Shooting System", it is a mini shooting game theatre enclosure designed to be played by six to eight players.[2] Only one game, Space Hard, was specifically developed for its operation.[3]

One of several early interactive attractions that served as forerunners to those that would later appear in Sega's own Amusement Theme Park locations, Cyber Dome was installed almost exclusively at a select few large amusement facilities in Japan only. Little documentation of its existence appears to remain. 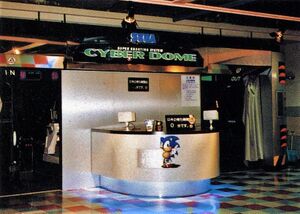 In its original incarnation, Cyber Dome is a 12m wide, 12m deep and 2.65m high theatre enclosure for eight players, also containing the capacity for a number of bystanders.[4] Players sit in eight augmented reality system and gun yoke-equipped cockpits, which simulate in-game motion by moving 2m back and forth simultaneously.[4] Action is projected onto a 300-inch screen, with player scores and rankings displayed above it through a number of LED clocks. Lighting and sound systems are used to provide fuller immersion.

Cyber Dome's design has frequently been compared as being directly influenced by the smaller "Theater-6" version of Namco's more popular Galaxian 3;[5] however, this was yet to release in 1990, with only the larger 28-player attraction version available at that point in time. Though of the same genre, its only game, Space Hard, additionally makes use of real-time 2D Super Scaler sprite graphics, instead of the pre-rendered 3D computer animation employed by Galaxian 3 through the use of LaserDisc technology.

In 1989, a team specifically dedicated to developing larger amusement attractions for Sega's increasingly large location-based entertainment facilities was formed within the then-R&D 4 engineering department.[6] These attractions are said to have been primarily ordered to be made by Hisashi Suzuki, who did not approve of Sega purchasing similar equipment off of other companies for its centers.[6] By 1991, this team would split off from the renamed AM4 and become AM5 alongside the medal game-focused AM6;[7] before this and its later Amusement Theme Park endeavours, however, it developed several early interactive ride experiments installed as centerpieces at only a select few large amusement facilities in Japan.

Though personnel had little experience yet in creating such rides, some members of the team had already been involved in the development of Sega Super Circuit.[8] Of these early attractions that then followed, Cyber Dome was an attempt to create an interactive first person on-rails shooting game ride, popularized by Galaxian 3 around the same time.[9] Elements of its outer space combat theme would ultimately go on to appear in the team's more advanced AS-1 and VR-1 motion simulators, and their respective simulation games Scramble Training and Space Mission. Early augmented reality technology was also employed; this and the genre of the system's intended games would then find their way into Ghost Hunters. 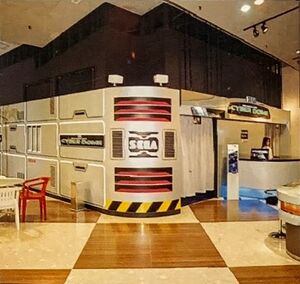 Cyber Dome first appeared publicly in its original eight-player version at the Amusement Machine Show 1990 in October 1990, alongside prototype parts of another early large attraction, CCD Cart.[4] At this time, the system's original software, Space Hard, was known as Star Liner.[10] Though both attractions were reported to be intended for sale, prices were not yet confirmed.[4] Sega would go on to manufacture a small number of redesigned Cyber Dome theatres, with it making appearances at several locations in Japan and promoted in Sega's En-Joint concept, alongside CCD Cart and the AS-1.[11]

The first Cyber Dome installation to go on location was sited at Carnival,[12] alongside CCD Cart and the first R360 units to be sold to an operation outside of Sega's own. Locations owned by Sega including Sega Charlie One,[13] and later Sega World Cospal,[14] as well as other domestic operations such as Komaki Corona World,[15] would then receive Cyber Dome installations during the early 1990s. It is thought that none were exported overseas and localized by Sega for its amusement facility openings in other territories, despite being reported on by numerous overseas publications.[16][17][18]

One installation of Cyber Dome would eventually appear outside of Japan alongside an R360 at a New Park arcade in Torrejón de Ardoz, Madrid, during early 1997; it is not clear whether this was distributed officially by Sega or a grey import.[19]