Ghost Hunters (ゴーストハンターズ) is a 3-minute long attraction designed by Sega AM5 for Sega's first Amusement Theme Park venues.[1] Combining the traditional dark ride attraction with elements of augmented reality and light gun shooter gameplay, Ghost Hunters was operated at Joypolis, Galbo, and overseas Sega World locations, as well as a number of non-Sega owned facilities. The former Sega World Sydney installation is still thought to be operational alongside Rail Chase: The Ride in India.[2]

This is a ghost extermination laboratory. Harold, the boss and his assistant Jennifer welcome players. The players are all applicants for jobs as ghost hunters. Suddenly an emergency occurs. The players have to start without any training. The inexperienced members get on the "*TURBO BUSTER*", equipped with a special automatic anti-ghost barrier and take off to Arthur's house in 7th Street. Your ammunition is the "BLUSTER BEAM" to beat ghosts. You have to beat the ghosts appearing in fast succession using the bluster beam. If you score highly, you can take off again. If you beat the leader "*GOALGON*", an original newspaper which praises you as a hero will be published.[3] 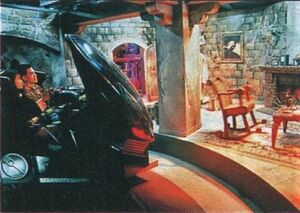 Ghost Hunters consists of sixteen two-seater ride vehicles, which automatically travel at a sedate pace on a track through a haunted house environment. Fixed to the front of each vehicle is two light guns and a large, concave perspex shield which acts as both a windshield and a mirror. As each car manoeuvres around the track, CGI ghosts and gun effects are projected onto the perspex screen and various parts of the attraction's scenery to create various augmented reality illusions, including moving paintings and drawer sets.

Players are tasked with using their guns to shoot the ghosts as quickly as possible, whilst travelling through horror-themed scenes. A mixture of digital and practical effects are used to strengthen immersion, including "breathing" walls and overhead air cannons which blow down onto riders. The amount and type of ghosts change depending on the players' performance. The "final boss" of the attraction is a creature named Gorgon; if defeated, a photo is taken of the player who dealt the final blow, and printed on a mock newspaper article given as a souvenir. Each ride cycle carries players around the circuit twice.[4]

In late 1992, Sega formally announced its plans to launch a series of indoor theme parks with interactive attractions, beginning in its native country in Japan and eventually expanding worldwide.[5] As part of this, the Amusement Theme Park concept and Amusement Theme Park Division were created to drive the parks forward, however another internal division, AM5, had already became instrumental in developing ride-like devices with interactive capabilities.[6]

To support other ideas in early stages of development, such as the the virtual reality-based VR-1, a horror simulation ride was envisaged by developers including Shingo Dote.[7] Plans and patents were made for a dark ride using 3D sound headphones and a walk-free type attraction involving ghost extinguishing in a manner similar to the popular Ghostbusters film, however both were eventually combined to create an interactive ghost train.[8] 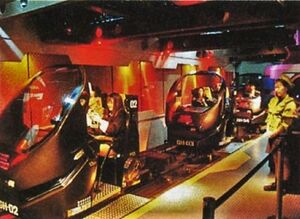 Ghost Hunters made its public debut at Osaka ATC Galbo in April 1994 alongside Virtual Shooting and Astronomicon,[9] and would go on to feature at eight other indoor theme park venues created by Sega. In the following year, a software update, Ghost Hunters II, made its debut at Osaka Galbo and Yokohama Joypolis, and further new revisions of the attraction, Ghost Hunters DX and Treasure Panic, first appeared in Fukuoka and Tokyo Joypolis.[10] During the same year, the original version was localised for its inclusion in SegaWorld London, making its final official appearance at Sega World Sydney in March 1997.

One of these is known to have been moved to Yokohama Joyland in 1999, and was abandoned alongside the park after its permanent closure in 2002.[11] Another was relocated to be housed in Yoyo Land, a Thailand indoor theme park, during the 2000s, where it remained until the early 2010s.[12] Sega also installed a version in the first Neo Geo theme park, Neo Geo World Tsukuba, opened by SNK in December 1995.[13] The only installation to remain in operation is the former Sega World Sydney model, purchased at auction by Indian resort Haiiland after the venue’s November 2000 closure.[2]

After Ghost Hunters made its debut at Osaka ATC Galbo in April 1994, an updated version officially referred to as Ghost Hunters II ~ The Labyrinth of Poisonous Moths ~ (ゴーストハンターズП～毒蛾の迷宮～) was installed at the venue and Yokohama Joypolis on 11 September 1995 as part of a renewal of their attractions,[4] with most subsequent locations also receiving the update thereafter. Ride facades in many of the parks still called the attraction Ghost Hunters, and changes made to it largely altered its theming.[4]

Ghost Hunters DX (ゴーストハンターズ DX), a second new version, debuted in April 1996 at Fukuoka Joypolis. In this revision, minor differences to the original version's game and theming are believed to have been added.[14] After making one further appearance at Shinjuku Joypolis, both versions were updated to use the earlier Ghost Hunters II. 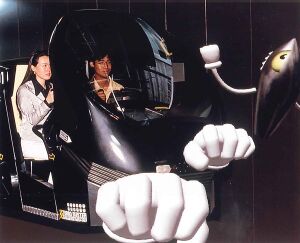 A redeveloped version of the attraction, Treasure Panic (トレジャーパニック), was first (and only) seen at Tokyo Joypolis on the center's opening day in July 1996 as one of nine debuting rides.[15] Its location in the facility was adjacent to its "MYSTERIOUS" area, neighbouring other newer horror-themed attractions, including Beast in Darkness and The Crypt.[10]

Though the physical attraction itself remains the much the same in this incarnation, with the exception of the additions of a branching path and different theming, its revised gameplay concept revolves around submerged treasure on a sunken pirate ship; players' guns instead act as triggers for large gloves used to hit and grab ghost pirate opponents.[10]

After its removal from Tokyo Joypolis in late 1999, Treasure Panic is believed to have been modified, relocated to Sega World Hakkeijima Carnival House, and renamed Ghost Pirates.[16] It is unknown when this version ceased operations; Shinjuku Joypolis' installation is also reportedly planned to have been upgraded to Treasure Panic, however this is not thought to have occured.[17]