The VR-1 or Virtual Reality-1 is an interactive virtual reality-based large attraction collaboratively developed by Sega AM3, AM4, AM5, and Virtuality.[4]

Designed to be one of the premier attractions of Sega's Amusement Theme Park venues in Japan,[5] as well as SegaWorld London and Sega World Sydney, it became one of the more well-received aspects of the venture,[4] and thanks in part to its Mega Visor Display is still considered a highly advanced example of immersive VR technology for its time.[4][6]

The hardware is unrelated to the similarly-named but separate Sega VR.[4]

VR-1 can be defined as an interactive virtual reality amusement park attraction. While little is known about the computer hardware its experience ran on, the three main elements of the ride are its Mega Visor Display, motion simulators, and software. When unified, the three create near-total immersion for riders. 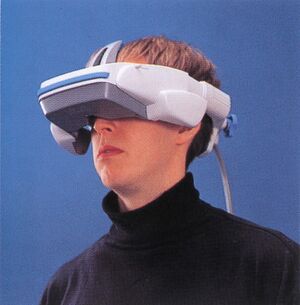 The Mega Visor Display, developed jointly by Sega AM3 and Virtuality,[4] is the central aspect of VR-1. With it, the attraction is able to successfully simulate a virtual world in a comfortable manner, earning it its namesake. When developing the headset, the key aims Virtuality and Sega followed were comfortability, light weight, and ergonomics,[6] intentionally designing it to keep body contact to a minimum, making its weight 640 grams,[4] and improving its adaptability to different head shapes through the use of adjusters. As a result, the MVD was one of the most structurally sound head-mounted displays at the time of its release.

In addition to its design advancements, the Mega Visor Display was also developed with providing a technologically superior graphical performance in mind. When originally released, the MVD could output real-time 3D graphics and pre-rendered films at a 756 x 244 pixel resolution with a 60°(H) x 46.87°(V) field of view, allowing riders to view a 360 degree landscape with the use of head tracking technology.[4] A cut-down liquid-crystal display was used to decrease the size and weight of the headset. 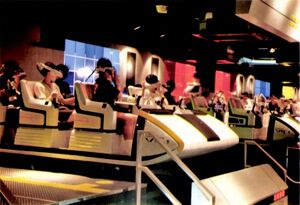 Instead of placing riders in static sit-down or stand-up pods, VR-1 uses four hydraulic motion systems to give off a stronger immersion effect to its full capacity of 32 riders. Each could seat eight people and utilised a 4-axis base, using the earlier AS-1 simulator jointly produced by Sega and Douglas Trumbull[7] as its basis and originally being named AS-1000 in addition.[6] Like the Mega Visor Display, numerous cosmetic appearances were designed during the development process, with an early design of one eventually seeing use on the cover of a promotional booklet for Sega's emerging Amusement Theme Park business venture.[5]

The finalised motion systems were modelled on futuristic spaceship pods, in-keeping with the attraction's space-age design motif. When running, the bases could provide 380mm vertical up/down and 34 degree left/right movement;[8] riders were provided with pre-requisite safety belts as a result of this. When not in use, the MVD headsets were stored in moulded stations situated between the seats. Alongside lighting systems and floor maps, the four pods incorporated the primary colour-coding of red, yellow, green and blue, though it is not clear if riders were accordingly divided up into teams based on this for installed software. 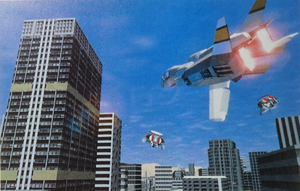 In-keeping with Sega's company ethos of "High-Tech Entertainment" at that time, one of the main selling points of their indoor theme park locations was to provide interactive ride attractions that were not too dissimilar to coin-operated arcade games.[5] As a result, VR-1 was developed with limited but fully functional gameplay elements, instead of remaining as a purely simulation experience. The original July 1994 installation and most others made use of Space Mission, a first-person rail shooter game.[8] In it, riders attempt to reach the fictional planet "Basco", where an enemy fleet has taken off to with stolen confidential information.[8]

Shortly after the MVD headsets and sound system of the attraction were tweaked in a renewal, a software update, Planet Adventure, was released for the original Yokohama Joypolis installation in 1995,[9] and later implemented in the Fukuoka branch upon its opening during April 1996.[10] Little is currently known about Planet Adventure, besides it involving a comical robot character, "E-2", piloting riders to an untraversed planet.[11] It is not thought to have been as widely released as the earlier Space Mission, and there is no evidence of a localisation ever being produced for overseas Sega World locations.

VR-1, in both its Space Mission and Planet Adventure incarnations at Yokohama Joypolis, made use of three areas. Each would approximately take three minutes to complete, making for a nine minute long attraction in total. Some installations of VR-1 are believed to have been smaller than the original version sited in Yokohama, likely not containing at least one of the former two areas before the main attraction. 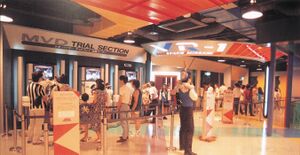 Before entering the attraction itself or joining the existing queue lines, new riders can become familiar with the Mega Visor Display headsets for the first time in the optional "MVD Trial Section", consisting of three small trial pods that can be used free of charge.

In them, a short promotional film demonstrating the MVD's intricacies is played. Dummy headsets are supplied for users to view a basic VR environment similar to the one in-game, and get to grips with the adjustment levers and switches for their own personal comfort in the attraction. 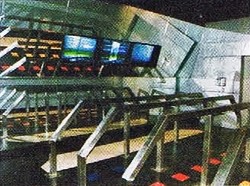 After initial admission, but before the main attraction begins, live actors/staff attendants direct riders to a pre-show viewing area much like those found in many rides found at Disneyland parks, as well as Namco's earlier Galaxian 3 attraction.

Displayed by a series of three rear projection screens as well as a lighting system, the show briefs them on the details and overall aim of the upcoming game with a short video recording. In it, the main character of the software currently ran appears, relaying the information to the awaiting attendees.

This area, like the main Space Mission game, was localised for the attraction's overseas appearances. Due to its setup, interior décor differed between locations, and a number of installations may have even used the area for queue lines. 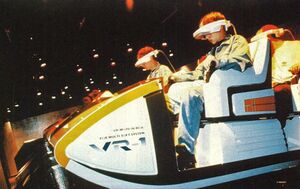 Completing the pre-show, staff guide riders again towards the main attraction area, dividing them up into two to four teams if in groups larger than 8. Once all are seated, and secure with the Mega Visor Display, the interactive software and motion units are ran.

Initially viewing a pre-rendered opening cutscene that sets up the scenario, riders then are prompted to partake in a first-person rail shooter game, using the triggers situated to the left and right sides of them to dispose of enemy targets and achieve the highest score.

When the interactive software has came to its end, the attraction's on-hand staff can assist riders with removing their Mega Visor Displays and leaving. If the highest scoring patron is discerned, a "Best Gunner" badge is presented to them as a souvenir before exiting.