The Mega Visor Display (メガバイザーディスプレイ), commonly abbreviated to MVD, is a virtual reality-based head-mounted display developed by Sega AM4, and Virtuality.

Used in the VR-1 indoor theme park attraction and Sega Net Merc arcade system for Dennou Senki Net Merc, it has been retrospectively recognized as one of the most advanced headsets of the 1990s, and continues to stand as Sega's most successful foray into virtual reality.[1]

The hardware is unrelated to the separate Sega VR project handled (and cancelled) by Sega of America. Its basic design would, however, be used by Sega again in the similarly-unreleased Virtua Visor.[2]

The Mega Visor Display was primarily designed for use in Sega's high-end simulation equipment deployed in entertainment centres, amusement arcades, and indoor theme parks, such as the Joypolis venues, providing much of the basis for the futuristic themes used in them.

Since its formation in 1985, UK-based development company Virtuality Group had been exploring the commercial use of virtual reality, and had seen a great deal of success with its 1000CS and 1000SD systems in the early 1990s during the first VR boom.[3] Though the games were often primitive, Virtuality machines were an enticing prospect for arcade venues, and were well received by the general public, who up until that point had largely been unaware of the concept. The company was one of the driving forces behind the early 90s VR craze, inspiring numerous other companies to make their own attempts.

However, despite acceptance from the public at the time, the 1000 series was restricted by its technology, being powered by Amiga 3000 computers and running, on average, at about 20FPS with a low screen resolution. While the 1000 series was able to convey a virtual world, the world was small, consisting of flat shaded polygons and simple geometry.[3] The 2000 series addressed some of these issues by switching to Intel 486 IBM PC compatibles in 1994, however earlier head mounted displays used were also not ideal, causing neck strain and hygiene concerns.

At the same point in time, Japanese video game and amusement companies Sega and Namco were involved in a technological rivalry. Though both had been competitors as early as the 1960s, their relationship intensified during the 1980s, with the rise of the Taikan games. One of the peaks of this rivalry came in 1990, when Sega announced their rotational R360 arcade machine, whilst Namco outclassed it considerably with the 28 player Galaxian 3 attraction, more an advanced interactive theme park attraction than a coin-operated video arcade game.

Initially only available at events, Galaxian 3 was later downsized and installed at Namco's Plabo venue in Osaka during 1991, with the original 28 player incarnation relocated to the first ever theme park created by a video game company, Wonder Eggs, during February 1992. Sega held their own in the sector of amusement operations with the Sega World venues and attractions such as Cyber Dome, and were also known to be developing their own theme park locations.[4] Numerous interactive attractions were planned to feature in them, with virtual reality noted as a potential technology that would be used.[5] 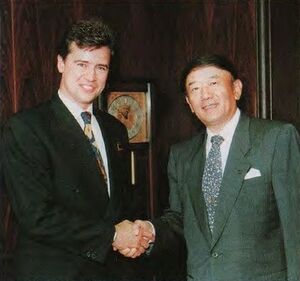 By 1993, Sega had several virtual reality projects underway. While Sega of America embarked on creating the ultimately unreleased Sega VR for the Sega Mega Drive, Sega of Japan sought external support, and by August 1993, Virtuality had won a £3.5 million contract to collaborate with the company.[1] Initially, this agreement was for a proposed Model 1 arcade game, with it not yet decided or publicly known whether one of Virtuality's own designs or Sega's would be used.[6]

Early development on what would later become Dennou Senki Net Merc was undertaken in Sega AM3's offices, with two programmers (Andy Reece and Stephen Northcott, a former programmer at Incentive Software) and two artists from Virtuality[7] collaborating with the likes of Hisaki Nimiya.[8] As negotiations evolved, Virtuality shared patented technology, displays, and optics designs with the neighbouring AM4 division, now working towards the creation of a headset that would outclass all other examples up to that point of time both ergonomically and technologically.[1]

By this time, AM5 had also joined development as a result of the plans to use VR technology in an attraction intended for the company's indoor theme park venues,[9] now officially classed under the Amusement Theme Park or "ATP" concept.[5] After several prototype iterations, some of which based on the advanced Visette headset,[1] the Mega Visor Display was created, allowing development on the projects that would utilise it to move forward. Collaborating AM4 developers including Masaki Matsuno and Masao Yoshimoto aided its design.[10]

The Mega Visor Display became publicly available for the first time in the VR-1 theme park attraction, debuting at Yokohama Joypolis, the first Joypolis indoor theme park, on its opening day in July 1994.[11] Initially running the on-rails first person shooter Space Mission, VR-1 combined the headset with eight-seater pods fixed to hydraulic motion bases, originally pioneered by AM5 in earlier motion simulation attractions like the AS-1, for full immersion. The attraction became one of the well-received aspects of the park, utilising the most advanced technology that could be found within it.[1] 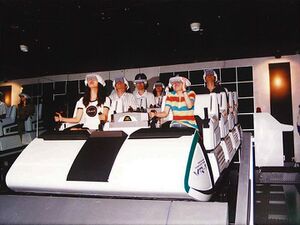 In the years that followed, copies were manufactured and deployed at two further Joypolis venues in Japan, Niigata Joypolis and Fukuoka Joypolis. The overseas SegaWorld London and Sega World Sydney sites also received a localised version running Space Mission, as one of several attractions within the parks that had been debuted several years earlier in the original Japanese locations.

One software update, 1995's Planet Adventure,[12] was developed before the attraction was phased out, with it often either removed and replaced or disappearing with the venues themselves - Galbo locations with the attraction saw it removed in their conversions to become standard amusement centers, and several Joypolis branches housing it were closed permanently in the late 1990s and early 2000s, both leading to the eventual collapse of the Amusement Theme Park concept.[1]

The release of the headset's original use, the Model 1 game Dennou Senki Net Merc, eventually came in 1995 after a September 1994 showcasing at Amusement Machine Show 1994 under the name of TecWar; the name change likely occurred to avoid legal conflict with William Shatner's TekWar novels and later video game. Already showing their age, the graphics produced by the Model 1 were far outclassed and compared unfavourably to the capabilities of its successor, the Sega Model 2, when showcased again at AOU Show 1995;[13] with only 70 machines produced and one game developed for the Net Merc, further development of the system was swiftly cancelled thereafter, despite the cabinets performing well on location test at Ikebukuro GiGO.[7] Sega and Virtuality are not thought to have collaborated on any work since. 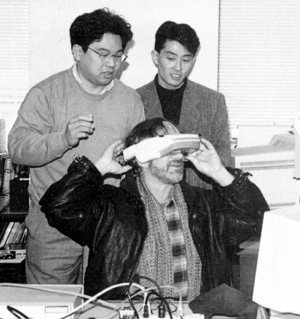 Hollywood director Steven Spielberg wears an MVD during a 1996 visit to Sega of Japan.

Though sometimes criticised for the still-rudimentary graphics it outputted and retrospectively confused with the separate Sega VR project, the Mega Visor Display has been acknowledged as one of the most advanced head mounted displays of its generation, and is not thought to have been truly surpassed in performance until the late 2010s.[1] The design of the headset eliminated major problems associated with earlier iterations, including ergonomics and comfortability, and was the end result of extensive research and development undertaken by both Virtuality and Sega. After its original releases in 1994 and 1995, the headset directly inspired a number of subsequent examples, and was adopted for use as a design motif in the Virtuaroid characters of the Virtual-On series.[9] Its first game, Cyber Troopers Virtual-On, is rumoured to have utilised them in early stages of development.[14]

Mega Visor Displays remained in Sega's R&D offices into at least the start of 1996; Steven Spielberg was notably pictured wearing one during his January 1996 visit for GameWorks negotiations.[15] Claims have been made on a number of occasions that Sega attempted to get virtual reality headsets off the ground for both the Saturn and on one occasion an early version of the Dreamcast;[16] US patents US5844530[17] and USD370909[18] filed in 1995 show that the MVD was used as the basis for two augumented-reality head-mounted display designs illustrated in diagrams for both theme park attractions and the Saturn. This has been confirmed by peripheral designer Kenji Tosaki as unreleased project Virtua Visor.[2]

In spite of its significant achievements, few Mega Visor Display headsets are thought to remain in existence today, with no VR-1 attractions still in operation, and a likely small number of Sega Net Merc machines preserved. Consequently, all three games compatible with it are also unpreserved. At least one headset is kept by Sega, as well as a promotional booklet detailing the development of the VR-1 attraction.[9]