Sega VR is an unreleased virtual reality peripheral developed by Sega of America and Ono-Sendai for the Sega Mega Drive.

Announced in 1991, the head-mounted display languished in development for a number of years, and was quietly cancelled around late 1994.[1] It is believed its cancellation was caused by technical difficulties with the then-embryonic VR concept.

The hardware is unrelated to the similarly-named VR-1 and its own Mega Visor Display headset, also used in the Sega Net Merc system for Dennou Senki Net Merc.

Sega VR is a Sega Mega Drive virtual reality peripheral with dual LCD screens in the visor, and interial head-tracking sensors; one of the first headsets to do so. It was also designed to be lightweight and comfortable for prolonged wear, more so than its contemporaries.

Each of the headset's LCD screens updates at a rate of 30Hz (thirty times per second)[2], and the inertia sensors update at a rate of 100Hz (one hundred times per second). This ensures that visuals update rapidly and in sync with the player's head movements. It also uses stereoscopic 3D technology to add three-dimensional depth to the visuals, and built-in stereo headphones to further enhance the virtual reality experience.[3]

After a decade of rapid growth and development, the early 1990s saw computer graphics reach a stage in which large numbers of 3D polygons could be displayed in real-time. As these virtual worlds expanded, so did the desire to engage with them firsthand. Virtual reality was seen as the next step forward following the move to 3D graphics and gameplay, but numerous factors slowed the process. Chief among these was the prohibitively-high cost of the hardware required to render a believable virtual scene, and the difficulties involved with developing the controllers and interfaces for interacting with the virtual world. As research and development costs rose, the virtual reality bubble burst, and the companies which invested were forced to cut their losses. Virtual reality in the home would be considered unfeasible for nearly two decades before another meaningful push in this area was made. 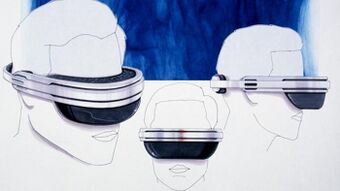 Flush with funds from the success of the Sega Genesis, Sega of America began development of a low-cost virtual reality peripheral for the system sometime in 1992. The project was led by Stewart Kosoy, an industry veteran with considerable experience in planning hardware and peripheral development.[4]

Initial headset designs were produced by famed design firm IDEO and featured a sleek headset sporting a futuristic silver finish. This design was further developed into the black and red headset seen in promotional material.[5]

After dealing with many early head-tracking sensor companies, Sega of America partnered with Ono-Sendai, a Silicon Valley startup specializing in virtual reality development.[6] Ono-Sendai was able to provide reliable sensors at a low unit price of just $1, and further assisted in development by helping Sega of America refine the headset’s tracking functions before its upcoming trade show appearance.[7] 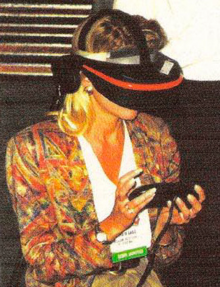 A journalist at Summer CES 1993 demos an early headset.

Sega VR was revealed to the public at Summer CES 1993 with a proposed price tag of $200[8]. The working title for the technology was Virtual VR, a name designed to match the working title of the Sega CD's Full Motion Video technology (Virtual VCR). It was originally scheduled to launch in December 1993, followed by a United Kingdom launch in 1994.[9] Four games were in development for the system, each using 16Mb cartridges: Nuclear Rush (the pack-in game), Iron Hammer, Matrix Runner and Outlaw Racing. Reports also suggest a port of the hit arcade racer Virtua Racing was once planned for the system.[10] While the peripheral's showing was given the usual Sega of America spectacle treatment, many of the general attendees were only shown prop systems for demonstrating its comfortability.[10]

Journalists who wanted to actually play Sega VR would have to do so privately with Sega of America representatives; these screenings were described admittedly by a company spokeswoman as "ropey".[11] With the exception of a select few Mean Machines Sega writers, no journalists from Europe were permitted entry to the exhibition space.[12] Though Sega simply claimed this was due to the system not being scheduled for release in that region until late 1994,[11] there were reportedly serious technical issues in converting the peripheral to work properly with PAL Mega Drive consoles.[13][12]

Although promotional advertising for Sega VR was fairly limited, Sega of America was already engaging in product placements for the upcoming hardware, such as concept artwork being used as a background poster in a September 1993 episode of Mighty Morphin Power Rangers[14] and a significant feature in the September 1995 Spike Lee movie Clockers (although the latter was still in production when Sega VR was cancelled and instead ended up using a similar-looking prop headset.)[15]

Like with many virtual reality headsets, there were reports of occasional testers developing headaches or motion sickness from prolonged use. Mark Pesce, founder of the company that supplied Sega VR’s head-tracking sensors, stated the Stanford Research Institute warned Sega of the 'hazards' of prolonged use.[16]

On September 5, 1993[17], British newspaper The Independent on Sunday reported that Sega's virtual reality project could cause eye damage, which caught the attention of Sega's lawyers. The newspaper was forced to issue an apology the following October 3, stating the headset was still in a prototype stage and not available on the market.[17] Despite the apology, the struggling peripheral had already been associated with negative press.

Although these concerns are commonly associated with modern virtual reality development, they seemed even more concerning back in the mid 1990s. For a Sega of America who was preparing for the upcoming 1993 video games congressional hearings, these concerns made Sega VR more than just a financial risk. If experienced testers were feeling motion sickness, then surely children would too, and the last thing Sega needed was more bad press.

The United States release would miss its Christmas 1993 launch window and be delayed until August of 1994.[18] Promotional coverage slowed, and after its initial buzz died off, Sega VR was removed from its release schedule in late 1994.

Sega has claimed the project was cancelled because Sega VR was so realistic it might cause users to injure themselves from excessive movement. However, developers for the hardware have stated that health concerns over motion sickness in children was the actual culprit.[19] 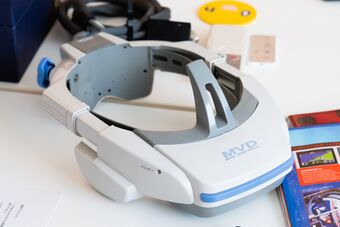 The Mega Visor Display, a separate VR project developed by Sega AM4 and Virtuality for VR-1.

In an October 1994 interview with Tom Kalinske, it was claimed some form of virtual reality headset was still in the works at Sega, but that the implementation shown at Summer CES 1993 "didn't deliver the VR experience".[20] In spite of the original project's cancellation, Kalinske was confident that a Sega 32X or Saturn-based headset would eventually be produced and sold for less than $225 USD.[20] By late 1996 the company was still suggesting a VR headset was in development, just that "it may be a long way off".[21]

Mere weeks after the Sega VR's only public showcasing at Summer CES 1993, it was announced that Sega's amusement research and development divisions in Japan had won a £3.5 million "test" contract with United Kingdom-based Virtuality, one of the first beneficiaries of the early 1990s VR craze, with the intent to create new VR works. Off the back of this, Sega would eventually create the separate Mega Visor Display headset.

Unlike Sega VR, this saw an official release in the Sega Net Merc arcade system for 1995's Dennou Senki Net Merc, as well as a large attraction, VR-1, first installed in Sega's new Amusement Theme Parks during 1994.[22] Plans for a home headset developed by Sega and Virtuality were also in motion for the Saturn (or purportedly even Dreamcast[23]) with the augmented reality-led Virtua Visor, but were ultimately never finalized.[24][25][26]

Though VR-1 achieved some critical acclaim, Dennou Senki Net Merc was panned upon its trade show appearances, ultimately receiving a very limited release due to stock depletion of the Model 1 boards it used. Following this, Sega and Virtuality parted ways, though MVD headsets remained at Sega's R&D offices for internal purposes into at least early 1996.[27] Sega would not return to the prospect of virtual reality again until the first powerful, cost-efficient consumer head-mounted displays designed by other companies appeared in the 2010s, leading to the release of Space Channel 5 VR Kinda Funky News Flash!.

Despite its cancellation and subsequent fade into obscurity as the fifth generation of consoles began, Sega VR was eventually featured in the 1995 Spike Lee movie Clockers. As filming began before the headset was cancelled by Sega in 1994,[28] scenes featuring a prop decorated to appear as a Sega VR headset remained in the final cut of the film. In these scenes, Tyrone (played by Pee Wee Love)[29] wears a Sega Genesis CDX and carries a Sega VR headset with 6 Button Arcade Pad, which he uses to play a fictional Grand Theft Auto-like game named Gangsta. He is seen playing while riding in the passenger seat of a vehicle, demonstrating the system's portability.